Gil Hodges is a candidate for the Hall of Fame 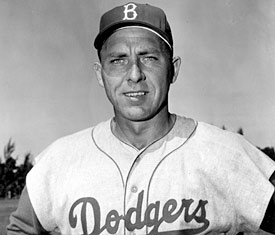 Gil Hodges is a candidate for the Hall of Fame. Make sure to check out the official website of Hodges. {linked here}

From the National Baseball Hall of Fame. {linked here}

Buzzie Bavasi, Ken Boyer, Charlie Finley, Gil Hodges, Jim Kaat, Minnie Minoso, Tony Oliva, Allie Reynolds, Ron Santo and Luis Tiant are the candidates for Golden Era Committee consideration for Hall of Fame election for the class of 2012. Bavasi and Finley are included for their contributions as executives, while the other eight are inclusions for their on-field careers. Kaat, Minoso, Oliva and Tiant are living; all other candidates are deceased.

Any candidate to receive votes on 75 percent of the ballots cast by the 16-member Golden Era Committee will earn election to the National Baseball Hall of Fame and will be inducted in Cooperstown on July 22, 2012, along with any electees who emerge from the 2012 Baseball Writers' Association of America election, to be announced on Jan. 9.
Posted by Roberto Baly at 10:30 AM