Hey Roberto
First off wanted to say keep up the great work on the site! Always one of my daily stops for Dodger info and news!
So I went to the big 1981 Dodgers Frank and Sons reunion this past Saturday. I had never been to Frank and Sons before so I wasnt sure what to expect. Parking was crazy but the lines inside actually moved pretty fast.
My only reason for going was to get Steve Garvey's autograph on a Dodgers Magazine I got back in 2008. The magazine has Garvey, Ron Cey and Nomar Garciaparra on the cover. I was able to get Ron Cey to sign the cover a few weeks ago at his appearance in Arcadia (Thanks for the heads up on that!) and wanted Garvey to complete the cover. (Well, until I can somehow meet Nomar and get him to sign it!!)
After he signed I wished Garvey luck on his bid to buy the team and he thanked me for the support.
It was a great event and even though i was only there for Garvey's autograph, it was cool seeing all these Dodger heroes in one place. One thing I did hear through various people in line was that Davey Lopes wasnt in the best of moods. He was refusing to pose for pictures and was basically ignoring fans that came to greet him. Cant verify this as I didnt goto his line, but it was pretty much the opinion of everyone that was talking about him.
Again keep up the great work!!
Doug Quintanilla 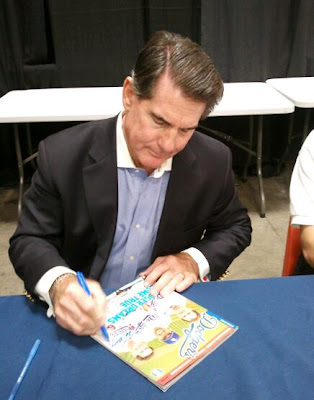 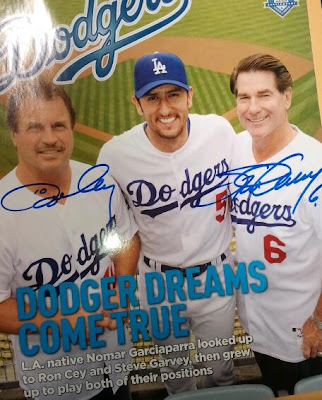 Thanks Doug!
Posted by Roberto Baly at 11:00 AM