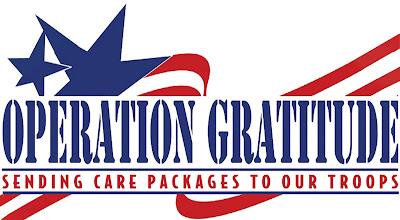 The Dodgers will also contribute letters to deployed soldiers signed by General Manager Ned Colletti, former Dodger and Special Advisor to the Chairman Don Newcombe and numerous Dodger employees. In addition, the team donated promotional items to Operation Gratitude to use in its holiday efforts.

Starting tomorrow and through the month of November, fans can visit www.dodgers.com/military to send Dodger photo postcards and messages to veterans and military members in their lives.

The Dodgers honor military members at every home game with their Veteran of the Game program, which treats the veteran and his or her family to Field level tickets and a visit to the field to watch batting practice and be recognized during pregame ceremonies. Honorees last season ranged from an Air Force cadet at UCLA to a Pearl Harbor survivor. Active duty and retired armed forces personnel, including their Reserve and National Guard components as well as military spouses and dependents, can also purchase discounted military tickets for all home games.

In July, the Dodgers and former Dodger Kenny Landreaux surprised an Afghanistan veteran at his home with the honor of being the Veteran of the Game at Dodger Stadium on the Fourth of July. Also at that game, Operation Gratitude threw out a ceremonial first pitch and 125 veterans from the Iraqi and Afghanistan Veterans of America (IAVA) and their families were introduced on the field during pregame ceremonies.

In 2011, the Dodgers donated approximately 17,000 tickets to military and veterans’ organizations, including free tickets for all military members during the month of May, and helped organizations including the Veterans Ticket Foundation, Coast Guard, Edwards Air Force Base, IAVA, the Marine Corps and the Navy League.

Details about the Dodgers’ discounted military tickets, the Veteran of the Game program and information about upcoming armed forces promotions can be found at www.dodgers.com/military.
Posted by Roberto Baly at 1:30 PM