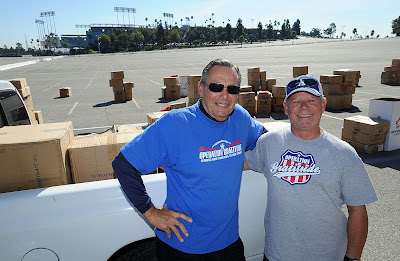 LOS ANGELES – Earlier today, the Dodgers donated thousands of promotional items to non-profit organizations around Los Angeles for use in their holiday efforts. Items included blankets, towels, bobbleheads, action figures, baseball caps, t-shirts and more. This event marks the fourth consecutive year the Dodgers have assisted local groups as they reach out to underserved families during the holiday season and launches the Dodgers’ 2011 holiday giving efforts.

The Dodgers distributed items to more than 40 pre-selected non-profit groups today at Dodger Stadium. Organizations that benefited include the Central City Action Committee, the City of Los Angeles Circle of Caring, the Department of Veteran Affairs, A Foundation for Kids, Friends of Expo Center, The Midnight Mission, Operation Gratitude and many others.