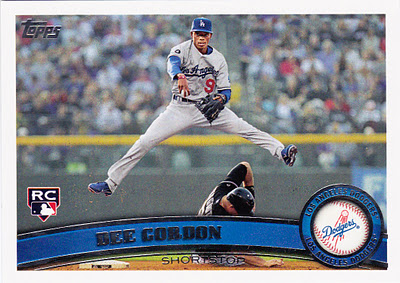 Thanks to Topps for sending the following news release:

The Topps Major League Rookie All-Star team began in 1959 with Willie McCovey being the first of 17 future Hall of Famers named to the squad (others include Johnny Bench, Rod Carew, Gary Carter, Andre Dawson, Carlton Fisk, Paul Molitor, Joe Morgan, Eddie Murray, Tony Perez, Kirby Puckett, Jim Rice, Cal Ripken, Ryne Sandberg, Tom Seaver, Ozzie Smith and Billy Williams).  The Rookie All-Stars will each have a trophy on their 2012 trading card in Topps Baseball, with Series One due out in early February.

The Major League Rookie All-Star Team is one of a number of awards programs managed by Topps to reward and encourage young ballplayers.  Since 1959, Topps has annually bestowed honors on minor leaguers, baseball scouts and the Baseball Organization of the Year.

And the Dodgers just sent the following -

The 23-year-old emerged as the Dodgers’ everyday shortstop and leadoff hitter by the end of the season, appearing in 56 games over two stints with the club. Gordon posted the second-highest batting average among Major League rookies (min. 200 at-bats) with a .304 mark, which was the fifth highest ever by a Los Angeles rookie. The Florida native also tied for second among big league rookies with 24 steals, ranking fifth all-time among Dodger rookies.

The Dodgers’ fourth-round selection in the 2008 First-Year Player Draft made his Major League debut on June 6 at Philadelphia and after struggling in his initial call-up, the speedster batted .345 over 34 games in his second stint with the big league club following his July 31strecall. That mark was the fifth-highest among qualifying National League hitters in the second half.

Gordon was recognized as the Gillette presents National League Rookie of the Month in September, batting .372 with a league-leading 42 hits in 26 games. Gordon also ranked second in the league with 12 steals in the month to go along with his 21 runs scored, seven doubles, one triple and six RBI. He posted a career-long 11-game hitting streak from Sept. 13-24, batting .400 (18-for-45) during the run, and set a career high with four hits on Sept. 8 at Washington.

Gordon is the first Dodger shortstop and the 20th all-time Los Angeles player to be selected as a Topps Major League Rookie All-Star in the 53 years of the award. First baseman James Loney was the last Dodger to be selected to the Topps All-Rookie team in 2007.
Posted by Roberto Baly at 2:00 PM