Yes! All is going to be good soon. 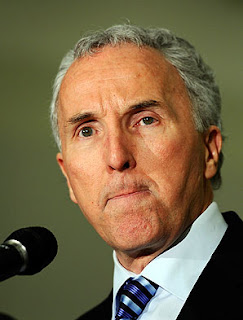 From Bill Shaikin of the L.A. Times - {linked here}

Frank McCourt agreed Tuesday to sell the Dodgers, abruptly surrendering the team after fighting to retain it over two years and in two courts.
McCourt and Major League Baseball have agreed to seek approval from the U.S. Bankruptcy Court for an auction of the Dodgers. The sale is expected to include the team, Dodger Stadium and the surrounding parking lots, a package bought by McCourt for $421 million in 2004 and likely to sell for two to three times as much now.


The league hopes a new Dodgers owner can be in place by opening day.
We got to think positive and hope someone comes in and purchases the Dodgers with good faith.

It's going to be a interesting few months!
Posted by Roberto Baly at 10:06 PM

This is the end, my only friend thee end! Super excited.. of course rumors about Cuban are already going around.. That would make alot of people happy!