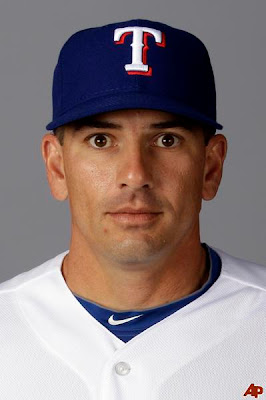 The Dodgers just made it official. They sign catcher Matt Treanor.

The Los Angeles Dodgers today announced that they have signed catcher Matt Treanor to a one-year contract with a club option for 2013. Dodger General Manager Ned Colletti made the announcement.

The Garden Grove, CA native has started 50 or more games in five of the past six seasons and thrown out 22.1% of basestealers throughout his career, including a career-best 41.9 caught stealing percentage in 2006 with the Marlins (13-of-31).

Treanor, 35, caught a team-high 81 games (52-29, .642) for the Rangers in 2010 and played a big role in Texas’ postseason run, catching all four of C.J. Wilson’s starts and homering in Game 5 of the American League Championship Series against the New York Yankees.

Treanor was originally selected by Kansas City in the fourth round of the 1994 First-Year Player Draft out of Mater Dei High School in Santa Ana, CA. He is married to two-time Olympic beach volleyball gold medalist Misty May-Treanor and resides in Coral Springs, FL.
Posted by Roberto Baly at 4:20 PM