Another Silver Slugger for Matt Kemp!

Another Silver Slugger for Matt Kemp!

Congrats! Winners at the bottom and a press release from the Dodgers. - 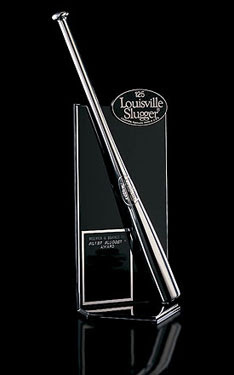 The Los Angeles Dodgers and Louisville Slugger today announced that outfielder Matt Kemp won his second-career Silver Slugger Award. The awards were handed out in a special hour-long telecast on MLB Network this afternoon.

After winning a Rawlings Gold Glove Award yesterday, Kemp became the first-ever Dodger to take home both a Gold Glove and Silver Slugger in multiple seasons after also doing so in 2009. The only other Dodgers to have won both awards in the same season were Dusty Baker (1981) and Russell Martin (2007). Kemp joined the Reds’ Brandon Phillips and the Rockies’ Troy Tulowitzki as the only National League players to claim both a Rawlings Gold Glove and a Silver Slugger Award in 2011.

It’s the seventh time that a Dodger outfielder has been honored with a Silver Slugger and since the creation of the award in 1980, a Dodger has taken home the honor 22 times, led by Mike Piazza’s five trophies.

The Silver Slugger award winners were determined by a vote of Major League Baseball coaches and managers who named the players they felt were the best offensive producers at each position in both the American and National leagues in 2011. Selections were based on a combination of offensive statistics, including batting average, on-base percentage and slugging percentage, as well as the coaches’ and managers’ general impressions of a player’s overall offensive value. Managers and coaches were not allowed to vote for players on their own teams.

The specially designed Silver Slugger Award will be presented to Kemp by a representative of the Hillerich & Bradsby Co., makers of Louisville Slugger, the Official Bat of Major League Baseball, in a ceremony early in the 2012 season. The trophy is three feet tall and bears the engraved name of the winner and his Silver Slugger teammates in his respective league.
Posted by Roberto Baly at 4:30 PM