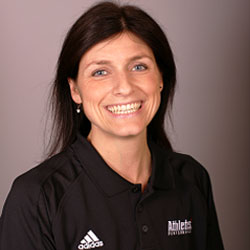 
The Dodgers will make Sue Falsone the first female head trainer in the Major Leagues as they reorganize the medical department, according to a baseball source.
Current head trainer Stan Conte is expected to remain with the club, although his duties are unclear. Conte joined the Dodgers five years ago from the San Francisco Giants.
Falsone, 36, served the Dodgers as MLB's first female physical therapist from 2008-10 before moving back to Arizona and remaining on a consulting basis during 2011. She is a licensed physical therapist and athletic trainer. She worked for Athletes' Performance Institute in Arizona for 10 years before joining the Dodgers.
I believe Stephania Bell of ESPN was the first to report this story. Click here to read the story and notice the comments from fans. What a bunch of idiots.

Here's a video of Falsone talking about her career in MLB. Video is from 2008.