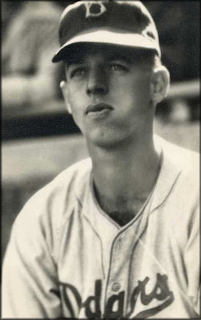 And another Brooklyn Dodger passes away....

Cy Buker passed away last week in Wisconsin. He was 92.

Former Major League pitcher Cy Buker – who lived in Greenwood in central Wisconsin – has died at age 92. He pitched in organized baseball from 1940-to-’52. And he spent the 1945 season with the Brooklyn Dodgers, when he went 7-2 with a three-point-two-three ERA. Buker pitched for the Dodgers’ farm club in Montreal in 1946 when Jackie Robinson broke baseball’s color barrier and broke into the game with that club. Buker retired after the ’52 season. He became a high school baseball, football, and basketball coach – primarily at Greenwood and Loyal, both in Clark County. He was a member of the Wisconsin Baseball and Football Coaches Associations’ Halls-of-Fame, along with the Central Wisconsin Baseball Hall-of-Fame.

A sad coincidence, earlier this month I mentioned the passing of another former Brooklyn Dodger who also passed away in Wisconsin. {linked here}
Posted by Roberto Baly at 8:00 AM