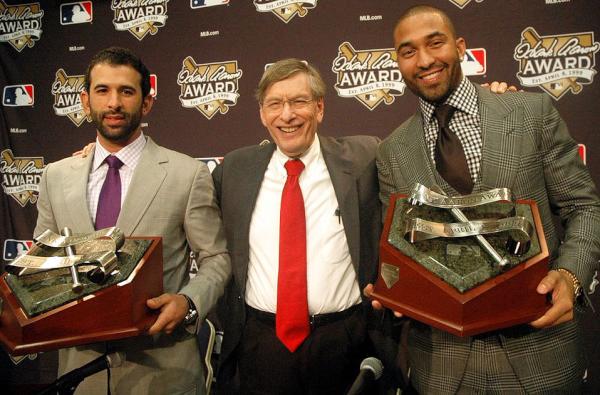 Kemp showing off his award. - 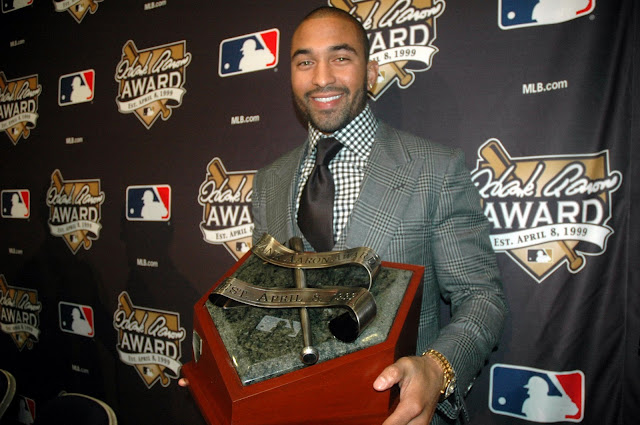 Kemp with singer Demi Lovato, who sang the National anthem. - 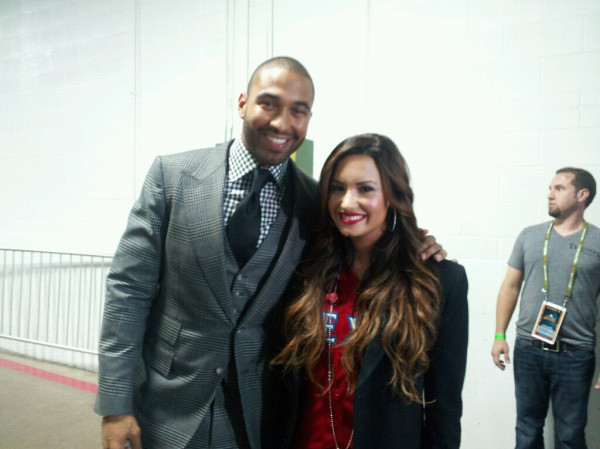 Major League Baseball announced today that Jose Bautista of the Toronto Blue Jays and Matt Kemp of the Los Angeles Dodgers have been selected as the winners of the 2011 Hank Aaron Award. This is the second consecutive year Bautista has won the award. Established in 1999 to honor the 25th Anniversary of Aaron breaking Babe Ruth’s all-time home run record, the Hank Aaron Award is officially sanctioned by Major League Baseball and recognizes the most outstanding offensive performers in each League.

Fans voted for the award on MLB.com, and for the second straight year, a special panel of Hall of Fame players led by Hank Aaron joined fans in voting for the award. The Hall of Fame panel included two new members – personally selected by Hank Aaron – Roberto Alomar and Joe Morgan. They joined panelists from last year, which included Tony Gwynn, Paul Molitor, Willie McCovey, Billy Williams and Robin Yount, forming a group comprised of some of the greatest offensive players of all-time who combined for 23,536 hits, 11,445 RBI and exactly 2,800 home runs.

“I congratulate Jose Bautista and Matt Kemp on being this year’s recipients of the 2011 Hank Aaron Award, named for one of the true pillars of our game,” Baseball Commissioner Allan H. (Bud) Selig said. “Jose has repeated as the American League winner after another brilliant season at the plate, leading Major League Baseball in home runs, slugging and walks. Matt enjoyed an extraordinary year, vying for the National League Triple Crown in the season’s final days and stealing 40 bases on the year. The best is yet to come for both of these young men. I look forward to watching Jose and Matt continue to emulate Hank’s example in the years ahead.”

“It is a real privilege to have my name on the award that recognizes the most outstanding offensive performer in each League,” said Hank Aaron. “I want to congratulate Jose and Matt on their fantastic seasons and express my gratitude to the Hall of Famers and fans who helped select this year’s winners.”

Bautista batted a career-best .302 and led the Majors with 43 home runs. The 31-year-old outfielder added 103 RBI and also led the Majors with a .608 slugging percentage and 132 walks to go along with a .447 on-base percentage (second in Majors), 24 doubles, two triples, 105 runs scored (sixth in the A.L.) and 312 total bases (sixth in the A.L.). The Dominican native became just the fifth player in Major League history to record at least 40 home runs, 130 walks and nine stolen bases in the same season, becoming the first American Leaguer to do so since Babe Ruth in 1930. In addition, the two-time A.L. All-Star was the only player in the Majors to record at least 40 homers, 100 runs scored, 100 RBI and 100 walks with a .600 slugging percentage in 2011, marking the second consecutive season that he has accomplished the feat and making him the first to do so in consecutive seasons since David Ortiz in 2005-2006. The 20th round selection in the 2000 First-Year Player Draft reached base safely in 136 of his 149 games played in 2011. Dating back to September 1, 2009, Bautista leads the Majors with 107 home runs, 22 more than Albert Pujols of the Cardinals, who ranks second during that span.