These are transactions that are not announced by the Dodgers so you have to investigate a little bit. I mentioned last Wednesday that Justin Sellers was not going to make his appearance next month in Valley Sports Cards in Tarzana. The card shop said that Sellers was going to play in the Arizona Fall League. {linked here}

I knew that was wrong since the Arizona Fall League will end in 3 weeks. I checked the Dominican Republic winter teams and guess who I find?

Justin Sellers arrived in the island last Wednesday to join Jerry Sands and the Tigres del Licey. He played last night for the first time. He went 0-3 with a walk while starting as a shortstop.

I couldn't find a picture of Sellers with Licey. They did release this picture. 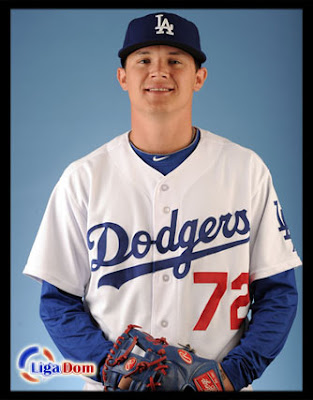 As disappointed as I am in the postponing of the appearance, I have to admit Justin, as well as a Jerry Sands, needs the playing time right now, especially if Dodgers plan on using him next season. Autographs can wait.

I agree with Dodgerbobble, gotta put in work, plus i have been getting autographs left and right and it's getting pricey.

You should comment on the competition comparison of the blog. You can highlight it's mind boggling. Your blog exploration/tour will broaden your conversions. Liga Inggris