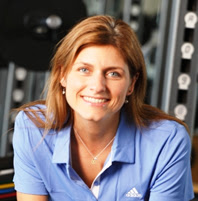 The news was out last Friday. {linked here} But the Dodgers made it official today.

LOS ANGELES – The Los Angeles Dodgers announced today that Sue Falsone has been hired as Head Athletic Trainer/Physical Therapist, making her the first female head athletic trainer in the history of major professional sports. In addition, Stan Conte has been promoted to Senior Director, Medical Services. General Manager Ned Colletti made the announcement.

Falsone became the first female physical therapist in the Major Leagues when she was hired by the Dodgers in 2007 and worked in that role through the 2010 season. In addition to her new responsibilities, she will continue to maintain her role working for Athletes’ Performance (AP) as the Vice President of Performance Physical Therapy and Team Sports. Falsone will spearhead a new partnership between the Dodgers and AP, which is located in Phoenix, AZ.

“This is a very special day not just for Sue, but for the Dodgers and Major League Baseball,” said Colletti. “The Dodgers have always been an organization of firsts and this promotion for Sue continues in that tradition.”

The Dodgers’ role as pioneers began in 1947, when Jackie Robinson became the first African-American to play Major League Baseball. Following that watershed moment in American History, the Dodgers were the first Major League team to move to the west coast of the country in 1958, the first organization to have both a Korean-born player (1994) and a Taiwanese player (2002) play in the big leagues, the first club to play a Major League game in China (2008) and the first team to establish a state-of-the-art academy in the Dominican Republic. In addition, the signing of Hideo Nomo in 1995 paved the way for Japanese players to compete in the big leagues.

“Sue’s credentials, previous sports medicine and strength and conditioning experience as well as her involvement with the Dodgers over the past four years make her uniquely qualified to lead the club’s Medical Department into a new and exciting direction,” said Conte. “She brings a fresh perspective to injury prevention and management that I strongly believe will reduce lost time due to injuries for the Dodgers.”

In addition to working with the Dodgers, Falsone (fal-SONY), 37, has spent the past 10 years at AP and is a Board Certified Clinical Specialist in Sports Physical Therapy (SCS), a Certified Athletic Trainer (ATC) and a Certified Strength and Conditioning Specialist (CSCS) through the National Strength and Conditioning Association. Falsone graduated from Daeman College in Buffalo, NY and earned her Master’s degree in Human Movement Science with a concentration in Sports Medicine at The University of North Carolina – Chapel Hill. The New York native travels throughout the Unites States and internationally to speak on a variety of topics and holds an adjunct faculty position with the Human Movement Program at A.T. Still University. She has also worked with athletes from the NFL, NHL and NBA.

“It is a true honor to be given this opportunity with such a progressive and historic organization,” said Falsone. “My work with the Dodgers over the past few years as well as my time with AP will serve me well in taking this next step.  I look forward to helping develop innovative and creative programs to reduce injuries and keep our players on the field so that they can achieve their potential.”

Falsone and returning Assistant Athletic trainer Nancy Patterson give the Dodgers the first pair of female trainers on one staff in the history of Major League Baseball.

Conte becomes Senior Director, Medical Services after spending the previous five seasons as the Director of Medical Services and the Head Athletic Trainer for the Dodgers. In his new role, Conte, 56, will manage the Major and minor league medical departments and also handle medical risk assessment and injury management. With his added responsibilities, Conte will no longer be in the dugout during games and will not travel with the team. Before joining the Dodgers prior to the 2007 campaign, Conte spent 15 seasons with the San Francisco Giants, including the last seven as Head Athletic Trainer/Physical Therapist.

Patterson is set to begin her second season on the Dodgers’ Major League medical staff as Assistant Athletic Trainer. The 28-year-old joined the organization in 2009 with the Single-A Inland Empire 66ers and worked for the Double-A Chattanooga Lookouts in 2010. Patterson is a native of Yorktown Heights, NY and earned her degrees in Athletic Training and Clinical Exercise from Ithaca College. She and her fiancée, Dustin, currently reside in Fort Myers, FL.

Harrel enters his sixth year with the Dodger organization and his first season as an Assistant Athletic Trainer for the Major League club. Harrel served as the club’s Triple-A Athletic Trainer with Las Vegas (2007-08) and Albuquerque (2009-11) and was appointed as the organization’s Head Minor League Athletic Trainer in 2008. Prior to joining the Dodger organization, Harrel worked for the Rangers (1986-2003), Marlins (2004) and Padres (2006), including one season on Texas’ Major League staff as an Assistant Athletic Trainer in 2003. Harrel, 48, earned his Bachelor’s degree in Physical Education with a business minor from Central State University (now University of Central Oklahoma). He is a certified athletic trainer and is also licensed as an athletic trainer in Oklahoma and New Mexico. He resides in Cashion, Oklahoma with his wife, Michelle, and three children, Ryan, Joshua and Emilie.

Tani enters his eighth season on the Dodgers’ training staff after working with the Hanshin Tigers in Japan for 10 seasons. Tani and his wife, Yoko, reside in Pasadena with their one-year-old daughter, Haruka.

Athletes’ Performance will partner with the Dodgers, focusing on helping to build a program of player physical development across the minor and Major League systems. The fully integrated program – from medical to athletic training to strength and conditioning – is established from the top down and is carried out 12 months a year across all organizational levels. Athletes’ Performance brings its decade-plus of industry leadership, integrated performance systems and a team of over 100 of the leaders in the field to support the partnership.
Posted by Roberto Baly at 12:00 PM