The Costliest Divorce in California History!

When Frank and Jamie were happy. - 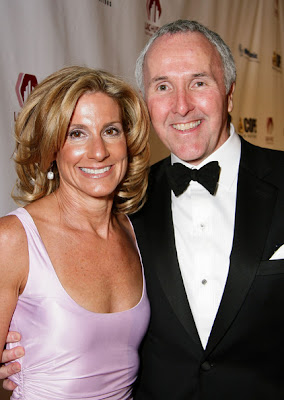 According to Bill Shaikin of the L.A. Times, this could be the costliest divorce in California history! Instead of wasting money on lawyers, how about a power hitter?

Frank and Jamie McCourt have reached a divorce settlement under which she would get about $130 million and relinquish any claim to a share of the Dodgers, multiple people familiar with the agreement told The Times.The settlement would remove Jamie McCourt as an obstacle to Frank McCourt's plan to retain ownership of the team by selling the Dodgers' television rights in U.S. Bankruptcy Court. The agreement also would appear to set up a winner-take-all court showdown for the Dodgers between Frank McCourt and Commissioner Bud Selig.The people familiar with the agreement spoke on condition of anonymity because the settlement has not been finalized. However, such a settlement would conclude what is believed to be the costliest divorce in California history.

Make sure to read the entire article.
Posted by Roberto Baly at 12:30 PM

For being millionaires I would've expected at least some implants and a face lift on Jamie. Come on everyone was thinking it