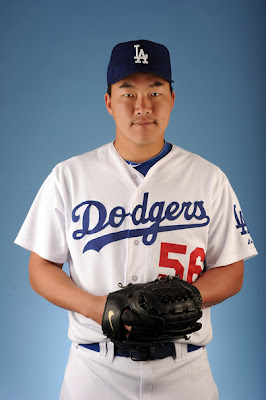 I'm sure the Dodgers will say something soon.

Hong-Chih Kuo says his elbow is in pain. Is this the end of Kuo's career? He was scheduled to participate in the MLB All-Star exhibition games in Taiwan next month.

Hong-chih Kuo of the Los Angeles Dodgers will skip upcoming Major League Baseball (MLB) all-star exhibition games in Taiwan due to an elbow injury, the Chinese Taipei Baseball Association (CTBL) said Tuesday. According to a CTBL press statement, Kuo was examined by Dodgers' head trainer and physical therapist Stan Conte Oct. 25 Taiwan time, one day before his scheduled return to Taiwan for the five-game series scheduled to take place Nov. 1-6. Kuo, a left-handed pitcher who has had elbow surgery four times, experienced elbow pain during the examination and Conte suggested that he drop out of the series. Kuo will receive further examination from the team's head physician Neal Elattrache. Kuo started training four weeks ago for the exhibition series, in which he was expected to start a game, said the CTBL statement.

That's sad. And remember that Kuo said last month he wasn't sure if wanted to come back next year. He wanted to be healthy.


Nobody on the current roster has been a Dodger longer than Hong-Chih Kuo, but he's not sure whether he wore the uniform Wednesday for the last time.
Kuo kept going through four elbow operations, but the anxiety disorder that sidelined him this year still has him uncertain if he'll continue playing. Unlike last winter, when he threw nonstop, he said he will soon return to Taiwan and shut it down mentally and physically.
"I need a break," said the 30-year-old, who signed in 1999. "I love baseball and that's why I keep going. If I want to still play and somebody wants to give me a try, I play. If not, fine with me. I'll miss it. But I don't want to play unless I enjoy it again."
I've always been a fan of Kuo. He just never gives up. I hope this is not the end of his career.
Posted by Roberto Baly at 3:00 PM

It's so sad. He's always had amazing stuff, but after watching him pitch in 2011, it seemed like the end was near. I really hope I'm wrong about that because Kuo is so exciting to watch when healthy.

This scares me. A healthy Kuo was seriously brilliant. It'll be another hole in the bullpen. This whole off season just freaks me out. The uncertainty of ownership is just going to be another means of the Dodgers missing out on key free agents, AGAIN. Who's going to want to sign with the Dodgers with that crap looming over the team? I was just telling my husband how pissed I am every time I see Uribe's and Lilly's contract in writing. That kind of money could've gone to Fielder...even CJ Wilson, adding insane depth to our rotation. Oh well. Might be another long season ahead. Unless Marc Cuban pulls a miracle and does buy the team.