Tommy Lasorda will be in the dugout this Thursday. Call him Coach Lasorda! 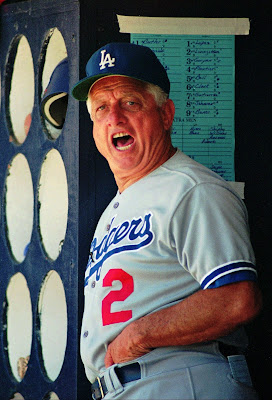 LOS ANGELES – Hall of Fame Manager and Special Advisor to the Chairman Tommy Lasorda will join Manager Don Mattingly in the dugout as an honorary coach this Thursday, September 22 as the Dodgers take on the San Francisco Giants, the Dodgers announced today. The invitation was extended by Mattingly on behalf of the organization to help celebrate Lasorda’s 84th birthday.

“I am so deeply honored and grateful that Don would ask me to do this,” said Lasorda.  “I loved every minute of managing during my 20 seasons with the Dodgers and it is always outstanding to put on the Dodger uniform.”

When Lasorda steps into the dugout on Thursday, it will be nearly 35 years to the day that he took over the managerial reigns from Walter Alston (September 29, 1976). Over the next 20 years as the Dodgers’ manager, Lasorda went on to compile a 1,599-1,439 record and win two World Championships, four National League Pennants and eight division titles. He currently ranks 17th with 1,599 wins and 16th with 3,038 games managed in Major League history. The former skipper also collected 16 wins in 30 NL Championship Series games managed, the most of any manager at the time of his retirement in 1996.

Since his retirement, Lasorda has only been back in the dugout three times officially.  During the 2000 Olympic Games in Sydney, Australia, Lasorda managed an underdog United States team to the Gold Medal over the highly favored Cuban National team just five days after celebrating his 73rd birthday. The Olympic Gold Medal, which Lasorda considers his greatest professional achievement, marked his return to the dugout after his retirement in 1996. The following season, Lasorda joined Bobby Valentine and the 2001 National League All-Star team as an honorary coach for the Mid-Summer Classic at Seattle’s Safeco Field.  In 2008, Lasorda was asked to manage the Dodgers during Spring Training for eight games as then manager Joe Torre took part of the team to China to play a goodwill series against the Padres.  Fittingly, Lasorda managed those games during the last Spring Training in Dodgertown in Vero Beach, Florida.

Lasorda’s achievements as a manager were recognized by both Major League Baseball and the Dodgers just a year after his retirement. On August 3, 1997, Lasorda was elected to the National Baseball Hall of Fame by the Veterans Committee in his first year of eligibility. He was the 14th manager and 52nd Dodger inducted into the Hall of Fame. Just two short weeks after his Hall of Fame induction, the Dodgers bestowed their highest organizational honor to Lasorda when they retired his uniform number (2) on August 15, 1997. His retired number is currently displayed above the Left Field Pavilion between Dodger greats Pee Wee Reese (1) and Duke Snider (4).
Posted by Roberto Baly at 9:50 AM