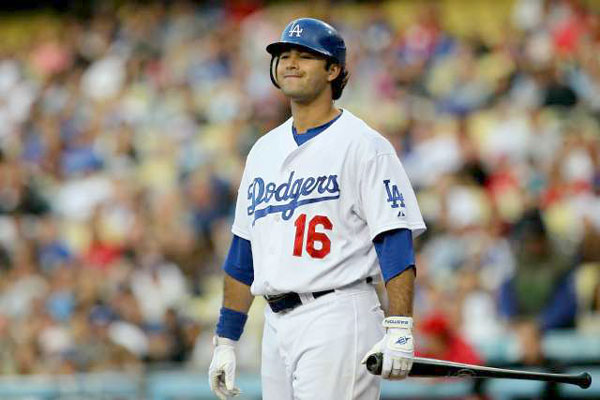 Andre Ethier made controversial comments last week by implying that the Dodgers were putting him on the lineup even though he's hurt. {linked here}

The day after he said those comments, Don Mattingly and the medical staff held a private meeting with Ethier.

He later said that it was him that chooses to play everyday, not Mattingly.

He did get on fire though. Check out his stats since making those comments.

In the first few days after the incident, I spoke to a handful of his teammates. Let's just say I didn't find many willing to publicly offer encouragement.Not only had Ethier broken an unwritten code about publicly speaking ill of the manager -- in this case a popular one in Mattingly -- he'd exposed himself to criticism that the injury was a cover for his poor second-half performance.

Ouch! You can't blame his teammates. How can you defend him when he said it was the Dodgers that wanted him to play hurt. The Dodgers denied it and Ethier said the next day it was him that wanted to play. So why did Ethier create this drama?


Something's eating at him, deeper than it has before.
It's something we've all felt at one point in our personal or professional relationships, and it's basic to the human condition. Ethier simply needs a commitment.
But like everyone and everything associated with the Dodgers in this star-crossed season, he's living in a world of uncertainty, where future happiness and hopefulness seem further away every day.
It's making him restless and insecure. It's exacerbating his already volatile nature.
It's why his latest public blowup probably won't be his last of the season, and why his angst seems to have festered, not healed, since the beginning of the season when he vented that this could be his last season in Los Angeles, presumably because the Dodgers non-tendered Russell Martin in the offseason and might not want to pay Ethier what will likely be a $10 million to $11 million salary in 2012, his last year under club control.
So because you haven't received a contract extension, you're going to get mad? Look at Matt Kemp. He's in the same situation. The Dodgers have him under club control through 2012. I don't see Kemp acting out.

It's going to be interesting if the Dodgers do bring Ethier back or decide to non-tender him and use that money somewhere else.

And Shelburne has this quote from Casey Blake.

So for guidance, and maybe a bit of wisdom, I approached veteran third baseman Casey Blake. Blake has made a nice living in baseball and is universally respected in the Dodgers clubhouse. He has also played through more injuries to bother listing. Two days after we spoke, he announced he was having season-ending surgery on his neck.

But on this point, his prescription for Ethier was clear.

"Maybe there's some animosity towards the team," Blake said. "But so much of this game is to go out every day, every day, whether you don't feel like it or not and trying to be as consistent as you can be.

"Then, if you do that on a consistent basis, other issues like the money or the team stuff or whatever, it'll all fall into place. If you respect the game, go out there and bust your butt every day and worry about the things you can control, compete every day, everything else will take care of itself."

Blake is absolutely 100% correct. Stop complaining and let the bat do the talking.
Posted by Roberto Baly at 12:30 PM

They have to tender him - not worth losing him for a draft pick. But i wouldn't be surprised if he is traded in the off season.

I'd rather use the $10 million saved from Ethier, the $12 million of Kuroda (assuming he doesn't come back, and the $11 million of Furcal to go after a front line SP and fill other holes (Aramis Ramirez? Michael Cuddyear? Prince Fielder?)

Just to be real, let's remember that the main story came from T.J. Simers, a writer with a reputation for stirring the pot. I bet everyone's quotes were taken out of context, some blanks were filled in, in both Ethier and Colletti's case.

Simers played off the image of Ethier as a "moody" ballplayer prone to explosions who has expressed desire to change the scenery this offseason, as well as Colletti's image as a GM who blocks young talent, criticizes young stars in the media, and pampers the once-shiny veterans he seeks out every year (I imagine a dog-eared 6 year old copy of "Baseball Today" in his possesion during the offseason and trade deadlines), every year having one past-his-prime guy who is lucky to get 8 hits in a season-long PH spot.

He wanted to stir the pot, and the L.A. media gobbled it up, every last sportswritter, tv reporter and blogger. It's sad when people don't stop and think WHY this story is being put out there: T.J. bored with a 6 game winning streak, and wanting to cause some instant chaos. Again.