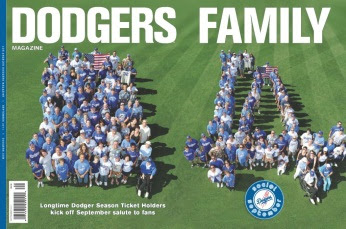 The September edition of Dodgers Magazine has a first-of-its-kind cover featuring Dodger season ticket holders who have been with the Dodgers since 1980 and prior. The fans were photographed as a group in center field at Dodger Stadium. Many fan-centric stories are in the September salute to fans as well as features on Matt Kemp and Clayton Kershaw. Fans can purchase copies of Dodgers Magazine at all merchandise stands throughout Dodger Stadium, and they can order print or online subscriptions at dodgers.com/magazine or by calling 877-258-3062.
Posted by Roberto Baly at 10:30 AM