Roberto "The Next Fernando Valenzuela" Osuna Signs with Blue Jays 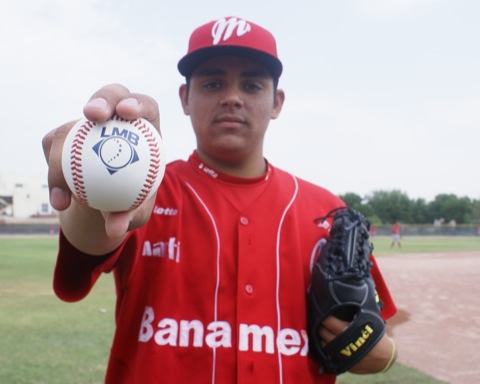 Are we still in the international scene? It's been like this for a while, no? I can't even blame Frank McCourt. I think it all started with the Fox ownership. It was always a priority for the O'Malley family to scout in Latin America.

Last March I told you that the Dodgers were going to scout Roberto Osuna. A 16 year old pitcher from Mexico that is already throwing 94 mph. {linked here}

A dozen teams were interested in Osuna. Many scouts believe he's the real deal. The Toronto Blue Jays signed Osuna.

From The Canadian Press - {linked here}

When Toronto Blue Jays scouts first saw Roberto Osuna pitch, they knew the team had to have him.The club got their man Tuesday, signing the 16-year-old Mexican right-hander and six other international prospects to contracts.Blue Jays director of Latin America operations Marco Paddy saw Osuna for the first time almost two years ago at a competition for the Mexican national team.Paddy and his scouts have followed Osuna's progress ever since."When you see him at 16 years of age and his ability to pitch competively now — obviously he had to be a great attraction to a lot of other clubs," Paddy said on a conference call Tuesday. "But I would say he was the one guy that the minute we saw, that he was a guy that we had to go after."Osuna, the nephew of former major league pitcher Antonio Osuna, was ranked fourth by Baseball America in the projected signing bonus rankings.

Check out this video if you speak Spanish. It was aired last night. Osuna speaks to ESPN Deportes.

Good luck Roberto!
Posted by Roberto Baly at 10:00 AM