McCourt gets $1.2 Billion Offer For Dodgers 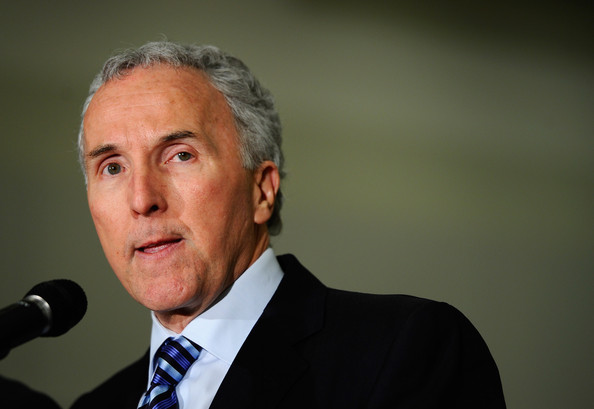 Frank McCourt's financial troubles might be over if accepts this deal. Bill Shaikin of the L.A. Times is reporting that Bill Burke, along with other Chinese and American investors are willing to purchase the Dodgers for $1.2 Billion dollars. Yes, that's correct, $1.2 Billion!

Burke's group is offering a cash payment. It would include the Dodgers, all real estate related to the team and the team's media rights. McCourt has 21 days to accept the deal.

From Shaikin of the L.A. Times {linked here}

Frank McCourt has been offered $1.2 billion to sell the Dodgers, The Times has learned.The bid is headed by Los Angeles Marathon founder Bill Burke and funded in part by Chinese investors, according to a letter sent to McCourt on Tuesday. The letter was disclosed to The Times by two people familiar with its content but not authorized to discuss it publicly.The proposed sale price would set a record for a Major League Baseball team.In a brief telephone interview, Burke declined to discuss the bid."I have no comment at this time," Burke said.It is uncertain whether the embattled Dodgers owner is receptive to the offer. McCourt has said that he had no interest in selling the Dodgers and that he intended to remain the owner after the team emerges from bankruptcy protection.Steve Sugerman, a spokesman for McCourt, declined comment on whether McCourt had received the letter and whether he would consider selling the team.
Posted by Roberto Baly at 12:35 PM

Holy cow! I doubt he accepts but it would be great if he did.

Holy cow! I doubt he accepts but it would be great if he did.

I hope he at least presents this to Bankruptcy court and ask for an auction of the team to the highest bidder.

Lets bow our heads and pray!

If he doesn't accept this offer, he is the dumbest businessman ever.