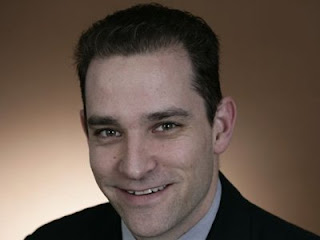 
Josh Rawitch, the Dodgers' chief spokesman, is leaving at the end of this season to take a similar post with the Arizona Diamondbacks, sources familiar with the matter said Monday.

The disclosure came only a few hours before the Dodgers were to open a three-game series with Arizona at Dodger Stadium. Arizona is in first place in the National League West.

Rawitch is the Dodgers' vice president of communications, and he has accepted the job of senior vice president of communications with the Diamondbacks, according to the sources, who asked not to be identified because they were not authorized to speak on the matter.
I'm not totally surprised since the organization is going through hell right now. Would you want to work for Frank McCourt?

I wish Rawitch the best in Arizona. I'd like to also thank him for giving the bloggers some time and treat us as if we are part of the media.

Thank you Josh.
Posted by Roberto Baly at 3:45 PM

Wow!! Sorry to hear that! He is a classy guy, met him a couple of times on Inside the Dodgers tours of the stadium, and thought he did a great job with that blog. Just sorry he had to take all the heat for McCourt from so many enraged fans! Good luck to him and his family!!!

The D-Backs are getting a great addition to their organization! I'm gonna miss seeing Josh around the stadium and wish him the absolute best.