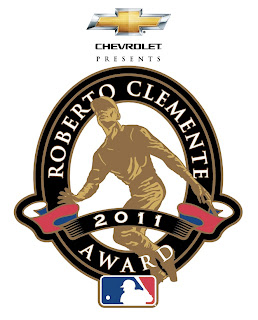 Fans can vote for the National Award Recipient on ChevyBaseball.com/Clemente and Register for a Chance to Win a Trip to the 2011 World Series

The Roberto Clemente Award presented by Chevrolet pays tribute to Clemente’s achievements and character by recognizing current players who truly understand the value of helping others. It is named for the 12-time All-Star and Hall of Famer who died in a plane crash on New Year’s Eve 1972 while attempting to deliver supplies to earthquake victims in Nicaragua.

Kershaw’s charitable work has been focused on an organization called Arise Africa, which raises money to help build orphanages in Zambia. Clayton made a special visit to that African nation this past offseason with his wife, Ellen, who has made six trips to the impoverished country. Upon his return, Kershaw came up with the idea to donate $100 per strikeout to the organization in the hopes of building another orphanage for the kids. To date, the Texas native leads the National League with 231 strikeouts and “Kershaw’s Challenge” (www.kershawschallenge.com) has raised $47,530 to the charity.

In addition to his efforts abroad, Kershaw is also a strong supporter of the Dodgers Dream Foundation and this year he attended the annual bowling tournament hosted by his teammate, James Loney, spoke to the Dodgers Dream Foundation Youth Baseball Camp and took part in a photo shoot for our the Heart Gallery Calendar which helps finds homes for Foster Children. He also attended a video game party at Dodger Stadium for a group of children with the Reviving Baseball in Inner Cities (RBI) program.

In addition, Kershaw acted to help families in need of disaster relief following the tsunami in Japan, the tornado in Alabama and the tornado that devastated Joplin, Mo. Following each of these natural disasters, Kershaw and several of his teammates signed autographs to raise money for people in need of shelter, supplies or medical care.

On the field, Kershaw has been exemplary as well, fortifying his case for the 2011 Cy Young Award each time out. In addition to leading the National League in strikeouts, the left-hander currently leads the Major Leagues in ERA (2.36) and ranks second in the NL in wins (18) and opponents’ batting average (.210). In his last trip to the mound, Kershaw became the first Dodger hurler since 2000 to win 18 games in a season and will still have three more starts in his quest for 20 victories this year, beginning tomorrow night.

* Member of Baseball Hall of Fame

Beginning tomorrow, fans are encouraged to participate in the process of selecting the national award recipient by visiting www.chevybaseball.com/clemente, a site powered by MLB.com and created specifically for the Roberto Clemente Award presented by Chevrolet platform, to vote for one of the 30 Club nominees. Voting ends on Oct. 9 and participating fans will be automatically registered for a chance to win a trip to the 2011 World Series, where the national winner of the Roberto Clemente Award presented by Chevrolet will be announced.

The Dodgers will recognize Kershaw’s nomination on Thursday, Sept. 15, prior to their home game with the Pittsburgh Pirates.
Posted by Roberto Baly at 1:00 PM