Will Andre Ethier Start Tonight? Plus thoughts on 2012 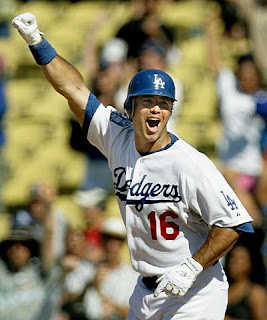 Will Andre Ethier start tonight against the San Diego Padres? Don Mattingly is not sure about that. And if he needs surgery, why not just put him on the disabled list now? Go through surgery now and be ready in 2012.

At a little past noon Sunday, an hour or so before the Los Angeles Dodgers took the field and had their five-game winning streak snapped in a 7-6 loss to the Colorado Rockies before 38,503 at Dodger Stadium, a handful of reporters gathered at the locker of Dodgers right fielder Andre Ethier to discuss his latest carefully crafted and possibly calculated media firestorm.By this time, Ethier already had been summoned into a closed-door meeting with manager Don Mattingly and general manager Ned Colletti in Mattingly's office, whereupon the message was conveyed to him that his words to Los Angeles Times columnist T.J. Simers seemed to suggest he was being ordered to play through a knee injury.By this time, Ethier, on orders from Mattingly and Colletti, also had met with team physician Dr. Neal ElAttrache, and although Ethier didn't give team officials permission to discuss his medical condition publicly, Ethier himself told us there was no real change, that he was still free to play through the injury if he chose and that he, and not Mattingly, had been the one who had chosen to play through it all season.

So why did you tell Simers the following?

"That's just the way it is — I keep getting put in the lineup, so what am I supposed to do?"

Ethier is finding a way to leave town or he's just frustrated.


It was here that I asked Ethier a fairly direct question, based on a working theory I had of what was behind his comments to Simers.
"Do you want to play for the Dodgers in 2012?" I asked.
His answer was about what I thought it would be.
"You don't want to just put this season behind you [yet]," Ethier said. "But obviously, one of the things we have to look forward to is finding out how we make ourselves better for next year. That is my biggest concern. How do I get myself healthy for 2012 so I can come back here and make myself the best I can be for that season?"
And then, later in the conversation, he added this:
"I just hope they bring me back. You look around, and obviously this is a great situation. It's still a great organization, no matter what is going on, on or off the field. Obviously, a lot of things need to be changed ... for the future, not only for the players, but for the team and the fans."
Just for kicks, I followed up on that last one by asking Ethier whether he was calling for an ownership change. As expected, he didn't go there, reminding us that the Frank McCourt era had its share of success before McCourt and his wife went to divorce court.
I wouldn't mind bringing him back. You would think a healthy Ethier would have a successful 2012. Plus it's his walk-off year so of course he's going to want to have a big year to get a big contract.

I wouldn't sign him to a 5 year deal though. He's 30 years old and seems to reach his ceiling.


As it stands, Ethier won't be eligible for free agency until after 2012. But is he trying to force his way out of town a year early? That's my theory. I don't have enough insight to know for a fact that it's true, or that it isn't. That's why they call it a theory. But I have to say, when you take the statements Ethier made in March, and to Simers this weekend, and put them together, it sure smells that way.

Could it be that Ethier is trying to become such a distraction that the Dodgers, rather than going through the expensive process of arbitration this winter -- he already is making $9.25 million this season and would get a significant raise -- will simply non-tender him, making him a free agent a year early?
One thing is clear: if it's a distraction Ethier is trying to become, he is at least succeeding there. Mattingly made that fairly obvious before Sunday's game, when he said he was "blindsided" by Ethier's remarks. He made it clear again during the game when, with the bases loaded, nobody out, the pitcher's spot due up and the Dodgers trailing 7-2 in the bottom of the seventh inning, he sent Eugenio Velez -- that would be the 0-for-28 Eugenio Velez -- to pinch hit and kept Ethier on the bench.
Jackson might be right. Maybe Ethier wants a change of scenery. It's going to be a interesting off-season!

Read these two posts from yesterday -

Is Andre Ethier tired of the Dodgers? {linked here}

I see him being traded fairly soon. He wants out anyways.

#1 I wouldn't play him tonight - I'd start Trent Oeltjen in RF, but my guess is that he will start.

#2 I would make every effort to trade him in the off season and use the $10M + he would get in arbitration somewhere else.