Hope all is well and you are enjoying fatherhood.

You might be interested to know that my wife, Nicholette, and I unexpectedly ran into Frank McCourt and Joe Torre among others last Wednesday in Cooperstown, NY, home to the National Baseball Hall of Fame and Museum.  After an afternoon of gawking at some of the most impressive baseball memorabilia available we look up and find Mr. McCourt walking down Main St.  i have to say Mr. McCourt was quite friendly and gracious with his time when we approached him.  He insisted that one of his companions take a photo of the three of us together.

Soon after we encountered Joe Torre, Nolan Ryan, Kim Ng and other movers and shakers from every MLB team.  Later that night we also had a conversation with Angel owner Arte Moreno and his trusted right hand man, Dennis Kuhl, at the Otesaga Hotel.   Both men could not have been more receptive.

It turns out MLB is conducting an owners' meeting in Cooperstown which included a reception at the HOF.   Here is a stunning fact:  we also met up with Jane Forbes Clark, Chairman of the Board of Directors of the HOF, who told us that many of the MLB owners and executives had NEVER been to Cooperstown before!

One last thing.  I decided to wear my Brooklyn Dodger cap to the east coast and you wouldn't believe how many folks have approached me and recited experiences they had at Ebbets Field---including a player in an over 40 tournament being held at Doubleday Field.  During his actual game he sought me out from the field while the game was in progress after spotting me in the stands wearing my cap to tell me he saw Jackie Robinson steal home at Ebbets Field in 1955 during his very first MLB game at the age of 5.  How cool is that! 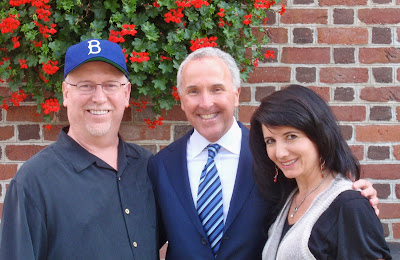 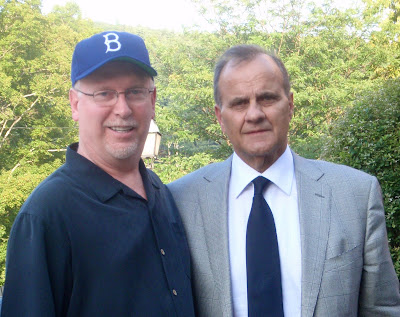 Thanks Mac for the e-mail!

I checked online to see what's going on with the owners. It's the quarterly meetings. It was held at the Otesaga Hotel, which is a mile away from the Baseball Hall of Fame. {linked here}
Posted by Roberto Baly at 10:00 AM

Poor Nicholette. I hope she showered after that encounter.

Also, Mac -- make sure you have your watch and wallet.

Ewwww! How can you even smile while McCourt is anywhere near you?