What's going on at Dodger Stadium for the upcoming series against the San Diego Padres? 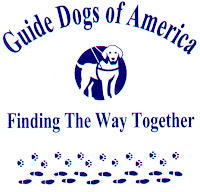 Lorri Bernson and her guide dog Carter will throw out an honorary first pitch at Monday’s game. Bernson is legally blind and works for Guide Dogs of America, a non-profit organization funded by private and corporate donations that provides guide dogs and instruction in their use, free of charge, to men and women from the United States and Canada. Dodger General Manager Ned Colletti and the Dodgers have partnered to make a significant financial commitment to Guide Dogs of America for the past two years and on Saturday, October 22 at 7:30 p.m. at the Saban Theatre, 790 KABC and Colletti will host a Chicago concert, with all proceeds benefitting Guide Dogs of America and the Foundation Fighting Blindness. Tickets are available at www.kabc.com, keyword Chicago. A total of 250 supporters of Guide Dogs of America will be in attendance at Monday’s game, many with their guide dog puppies-in-training, and 12 puppies-in-training and three guide dog teams will be on the field for the ceremonial first pitch.

United States Marine Corps veteran David Franco of Moorpark will be honored as the Veteran of the Game. Franco served on two overseas tours and was awarded the Purple Heart after his battle tank was hit by an IED.


Tuesday August 30 - 7:10 p.m.
A group from Heart of Los Angeles (HOLA) will meet with Dodger broadcaster Fernando Valenzuela before the game as part of the Los Amigos de Fernando program. Valenzuela will sign autographs for the group and they will watch batting practice from the field, enjoy the game and receive program t-shirts. HOLA provides at-risk youth with alternatives to unhealthy behaviors by offering hope and inspiration in lieu of gangs, crimes and disenfranchisement.

As the Dodgers continue to celebrate the 45th anniversary of The Beatles’ concert at Dodger Stadium in 1966, cast from The Beatles LOVE by Cirque du Soleil will perform an act from their GRAMMY® Award-winning Las Vegas production before Tuesday’s game. The performance will take place at approximately 7:00 p.m. on the field and will feature dancers and acrobats from “Drive My Car.” The performance will conclude with the ceremonial first pitch, featuring the iconic “Teddy Boys” of LOVE. Special ticket packages for Beatles and Cirque du Soleil fans are available online only through www.dodgers.com/LOVE and come with a commemorative gift from LOVE.

Carly Smithson, who was on Season Seven of “American Idol” and now performs in Cirque du Soleil’s Viva ELVIS, will perform the National Anthem and God Bless America.

United States Marine Corps veteran Sergeant Blas Villalobos of Texas will be honored as the Veteran of the Game. Villalobos served as an Infantry Squad Leader in Iraq and now volunteers with various veterans’ organizations in Los Angeles. In 2010, he was honored as the Veteran of the Year for the 54th District for his work with the Los Angeles veteran population. He is currently enrolled in the Master’s program at USC, where he is focusing on Military Social Work. 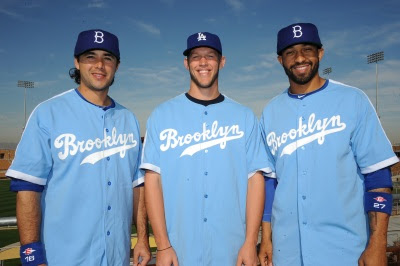 Wednesday is the Dodgers’ final throwback game of the season. All food and soft drinks will be half-price and the Dodgers will wear 1940s-era throwback jerseys. The Padres will wear throwback uniforms as well. For details or to purchase tickets, visit www.dodgers.com/throwback.

Gospel singer Darlene Smith will sing the National Anthem. Smith has three sons with sickle cell anemia who are patients at Children’s Hospital Los Angeles, and nine-year-old Jyair wished that his mother could sing the Anthem at Dodger Stadium.

Jerry Mickelsen, who has been a ticket seller at Dodger Stadium since it opened, will throw out a ceremonial first pitch.
Posted by Roberto Baly at 1:00 PM