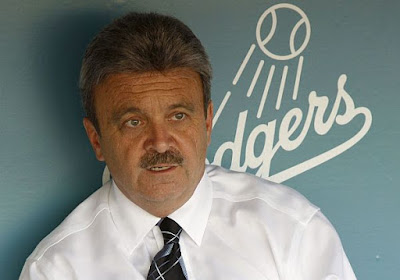 Not in that particular order.

Tom Hoffarth of the Daily News did a Q & A with Dodgers General Manager Ned Colletti. {linked here}

Q: Here's another question from a reader - and here it is in its entirety:

"Explain to me - to all Dodger fans - why Juan Uribe was signed for any price, let alone the amount you overpaid him. I have been a Dodger fan since 1971, and never has any player been less qualified to be on this team than Uribe. This year proves that he played way over his head last season and you took the bait like a typical former Giants employee. Or do you still work for Frisco? Maybe you thought his World Series ring would make you a champion by proxy? Why in God's name did you sign him, besides your unnatural attraction to former Giants? I know you probably won't ask this, but I just saved myself three sessions with my therapist writing that question out and pretending that Colletti might actually read it." And it's signed "respectfully" from Kieran C. Scott, a fan from Placentia.
A: God bless Kieran. I understand his frustration, and mine is equal to his. Going into the offseason, we needed someone to play in the middle of the diamond and could be a run producer. We didn't expect him to duplicate what he did last year, but certainly didn't expect this type of season. We thought 15, 16 homers and 65, 70 RBIs which, when you look at his track record, isn't that far off line with what he's been able to accomplish. But I get it. Signing free agents is the most volatile, toughest thing to really gauge. All I can say is thank you for your fandom.

It's not official just yet. But multiple sources like ESPN and Fox Sports are reporting the Dodgers will sign Juan Uribe to a three year deal for around $21 million. Why? Oh man, I hate this move. I don't mind having Uribe for 2011. But for 2012 and 2013 too!? Nooooooo. And they wasted that amount of money? I can't believe it.

Check out the rest of the Q & A by clicking here. Colletti talks about his cowboy boots and tattoos.

As much as I dislike Colletti as general manager of the Dodgers, I give him credit for always answering the tough questions.

I forced myself to read that. Don't get me wrong,I love Tom Hoffarth, I just hate Ned Colletti. Soon he'll be gone, along with his boss, and hopefully everything will be right in Dodgertown.

in another series of bad signings. what can we get zito for zach lee?