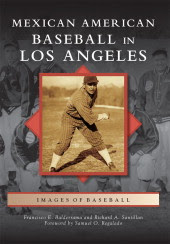 From 1900, with the establishment of the Mexican immigrant community, to the rise of Fernandomania in the 1980s, baseball diamonds in greater Los Angeles were both proving grounds for youth as they entered their educations and careers, and the foundation for the talented Forty-Sixty Club, comprised of players of at least 40, and often over 60, years of age. These evocative photographs look back on the great Mexican American teams and players of the 20th century, including the famous Chorizeros--the proclaimed "Yankees of East L.A."
Posted by Roberto Baly at 9:00 AM