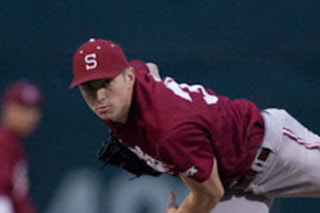 Great news! From the Dodgers -

Reed will be introduced to the Dodger Stadium crowd in a pregame ceremony before tonight’s 7:10 p.m. game against the Houston Astros.

Reed, a 6-foot-4, 190-pound junior, earned an honorable mention All-Pac-10 selection and went 6-2 with a 2.56 ERA in 29 games (one start) last season for the Cardinal, who advanced as far as the NCAA Super Regional. In 2011, the 21-year-old limited opposing hitters to a .211 batting average with 52 strikeouts and allowed just one home run in 52.2 innings. As a reliever, Reed posted a 1.87 ERA and ranked third in the Pac-10 with nine saves in 11 attempts this season.

The Cleveland High School (Reseda) graduate was rated as the top prospect and earned an All-Star selection in the Atlantic Collegiate Summer League in 2010, posting a 1.09 ERA with 39 strikeouts in 33.0 innings.

With only a few days remaining before the 9:01 p.m. PT Aug. 15th deadline, the Dodgers have signed 27 of their 50 draft picks, including eight of their top nine selections. A full list of the club’s signings from the 2011 First-Year Player Draft is below:

SEND FRANK BACK TO BOSTON

LET OUR VOICES BE HEARD!!!