Former Dodger Ralph Branca with his parents, Kati and John, in 1947. A record from the Auschwitz concentration camp shows that Branca's Aunt Irma, Kati's sister, died there in May 1942. 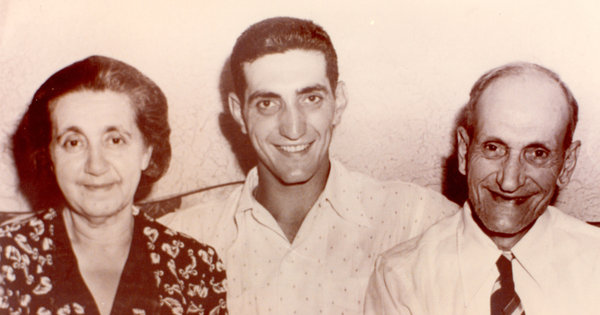 I really enjoyed reading this story last night on Ralph Branca and how he discovered that his mom was Jewish. From the New York Times - {linked here}

Branca’s mother, Kati, immigrated to the United States in 1901 from Sandorf, Hungary. (The town is now Prievaly, Slovakia.) Her maiden name was Berger. I had included this fact in the book I ultimately wrote about the Thomson home run, “The Echoing Green.” A psychiatrist from Brooklyn named Michael Bennett had read it, and he e-mailed me last December wondering if Kati was Jewish.

I telephoned Branca. Best he knew, his mother had been a Catholic all her life. He encouraged me to let him know what I found.
I passed the question to Michael Miller, a close friend and a professor of Jewish history in Budapest. He contacted a Hungarian Jewish genealogy group. And now, at the country club where Branca has lived since 1977, I laid before him the records that Miller and the group had found. They included:
¶ The 1884 marriage of Ignatz Berger and Antonia Gipsz, a ceremony at which Jakob Friedman, a rabbi in Sandorf, had officiated.
¶ The births of the couple’s eight children over the next 12 years: Kati, the eldest, and Miksa, Sandor, Irma, Fanni, Sandor, Moricz and Jozsef. (The first Sandor died as a toddler.)
¶ The mohels and sandeks who performed each bris and held each boy during the circumcisions.
¶ The arrival of Kati in the United States. On Nov. 17, 1901, a gatekeeper at Ellis Island categorized her as single, Hungarian, a seamstress, white, literate and “Isr”— Israelite, signifying a Jew.
And there was the death of Jozsef. On June 12, 1942, the Nazis deported him, his wife, Janka, their daughter, Helene, and their sons, Henrich and Ignatz. Jozsef was killed at the Majdanek concentration camp, his wife and children at Sobibor. Kati had two other siblings who remained in Europe. I did not learn how Moricz died. But helped by Yad Vashem, Israel’s Holocaust museum, I later learned that Irma, together with her husband, Arthur Grünmandl, her daughter Paula and her son Oscar, died at Auschwitz in 1942, one year before Branca turned professional in Olean, N.Y., pitching at age 17 for Manager Jake Pitler.
When I had phoned Branca and told him that his mother, Kati, was Jewish and that thus, according to traditional Jewish law, he and his 16 siblings were, too, the loud man was quiet. But when I had told him of the murder of his uncle, Branca had looked for words. “Uh, oh, boy,” he had said. “My mother never mentioned this to me.”
Amazing story. Click that link above to read the entire article.

From a family historical perspective, it's great to know your roots. I get it. I understand. What I dislike is when religious groups claim one of their own. Jewish leaders get all happy when Ryan Braun of the Milwaukee Brewers hits a dinger and he's not even Jewish. Or like his mom says, "where were they before?".  The "Hebrew Hammer" is not that Hebrew.


My dad is Jewish. His parents are from Turkey. From Turkey they went to Cuba. From Cuba, they came to the U.S.A. My mom is from Mexico and is Catholic. At the end of the day, we're all human beings and should love each other.

A few years ago I read a great article on why Jewish people are fixated on Jewish athletes. Luckily you can still read it online.

From The Jewish News of the Greater Phoenix area {linked here}

You could easily write a doctoral thesis on the sociological reasons why so many Jewish people, especially Jewish men, are fixated on Jewish athletes - finding out who is Jewish in the top athletic ranks and claiming them

Take the case of Milwaukee Brewers' rookie sensation Ryan Braun. His father is Jewish and his mother is not Jewish. Although raised in no faith, he clearly is proud of his Jewish background, as an interview earlier in the summer with The Wisconsin Jewish Chronicle made clear.

The assertion that Braun was raised in no faith is based on information received from the editors of the Jewish Sports Review, the most reliable and authoritative source on the Jewish heritage of athletes. They got it from Braun's college coach, who had got it from Braun himself.

Still, as Braun continued to slug his way through the summer, the Internet buzz grew about a new Jewish athlete on the scene. Already, Wikipedia, the user-created Web-based encyclopedia, was building a special Jewish section within Braun's entry with information of dubious validity. (It also doesn't mention that Braun's mother is not Jewish).

Enter the Jewish Press, a Brooklyn-based Orthodox newspaper. In an Aug. 8 article titled, "Greenberg to Green to Braun," the Brewers rookie was hailed as the heir to Jewish baseball legend Hank Greenberg and New York Mets outfielder Shawn Green. Never mind that most of the newspaper's readers wouldn't consider Braun Jewish, once they learned that his mother was not a member of the tribe.

The issue came up in a profile of Braun, which appeared in the Aug. 28 edition of USA Today Sports Weekly. The profile noted that Braun's non-Jewish mother, Diane, grew up in a home where Greenberg once lived. It also mentioned that Braun's father, Joe, was born in Tel Aviv and came to America as a young boy. But, the story went on to say, "Ryan was not raised Jewish and never had a bar mitzvah, but suddenly he's hearing from Jewish organizations claiming him as their own."

"He's totally not Jewish," Braun's mother was quoted as saying. "I heard some organization started called him, 'The Hebrew Hammer.' I said, 'Oh no.' My mother would be rolling over in her grave if she heard that."

"Ryan is proud that people want to claim him now, but where were they before?" she added. "You know how that stuff works."

If you're in the New York area, you can meet Ralph Branca. He's doing a book tour. Click here for the info.
Posted by Roberto Baly at 9:00 AM

Wikipedia quotes Ryan Braun as saying "I am Jewish." It doesn't matter if his mother said he isn't. His mother, like all moms, lost the ability to speak on his behalf when Braun became an adult.