Ex-Dodger to try out for Stanford Football 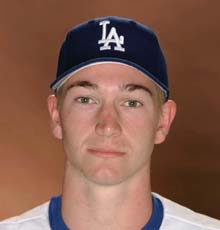 Meet Jordan Pratt. He was drafted in the 5th round by the Los Angeles Dodgers in 2003 as a pitcher.

Pitched 8 seasons in the minor leagues and went as high as Triple-A.

Check out his stats. {linked here}

As you can see, he didn't have a successful career in the minors. So what does the 26 year old do?

Goes to Stanford and tries out for the Football team.

A 26-year-old freshman in his first Cardinal training camp today, wide receiver Jordan Pratt was drafted out of high school by the Los Angeles Dodgers in 2003. After an eight-year career in the minors, Pratt brings a mature, professional athletic presence to the offense and Stanford Football.

Good luck Jordan! I'll be rooting for you!
Posted by Roberto Baly at 8:00 AM