I'm looking forward to this! 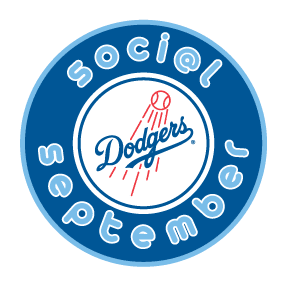 The Dodgers announced today the details behind Social September, a month-long initiative that will engage Dodger fans online, in-stadium and at home. Elements of the program (#SocialSept) will be seen on dodgers.com, on Facebook at facebook.com/dodgers, on Twitter @Dodgers, on the DodgerVision board at Dodger Stadium and with the team's broadcast partners.

Details can be found at dodgers.com/socialsept.

Throughout the month, fans will receive unique opportunities to win once-in-a-lifetime prizes and will get the chance to interact with some of their favorite Dodger players and personalities. Several Dodger players who have embraced social media will participate in the month-long initiative, including MVP candidate Matt Kemp (@TheRealMattKemp), Cy Young candidate Clayton Kershaw (@dodgers), first baseman James Loney (@JamesLoney_7) and rookies Javy Guerra (@JavyGuerra54) and Dee Gordon (@SkinnySwag9). Additional players and personalities will participate throughout the month.

Among the elements of Social September are the following:


* Fans submitting questions via Twitter during each Dodger home game from Sept. 12-22 will have the opportunity to have select questions answered by the players following the game

* During the road games from Sept. 1-8, fans will have the opportunity to ask questions via Twitter and have their questions answered on the broadcasts on KCAL 9 and PRIME TICKET

* On several dates, fans will have the opportunity to vote for the walk-up song used by their favorite players via a Facebook poll

* Select messages with the hashtag #SocialSept will appear on DodgerVision throughout the homestand from Sept. 12-22

* Dodger pitcher and Cy Young Award candidate Clayton Kershaw will "guest tweet" during one day during the month, as he takes over the official Dodgers Twitter account

* Among the once-in-a-lifetime prizes given away via Twitter include a meet and greet with Fernando Valenzuela, an introduction on the field before a game, a visit to the office of Hall of Famer @TommyLasorda and the chance to play catch on the field during the offseason

* The Dodgers will also engage their bilingual and bicultural fans as @JavyGuerra54 will give away tickets to a special section near the bullpen and will make special guest appearances during Viva los Dodgers, the culmination of a season-long series of events celebrating Latino culture in Los Angeles

* Additional surprise elements will be unveiled throughout the month

Details of all Social September contests and promotions will be announced on dodgers.com, the Dodgers' Facebook page (facebook.com/dodgers) and on Twitter at @Dodgers throughout the month.

On Twitter, the team switched to @dodgers at the conclusion of last season and had less than 30,000 followers. Since then, the team has more than doubled its reach and now sits just shy of 70,000 followers.

Last season, dodgers.com saw more than 34 million visitors as fans have come to consider the team's official website as a top source for news, information, video, statistics, downloadable apps, tickets and more.
Posted by Roberto Baly at 10:20 AM