I shot this picture on October 2009. Andre Ethier talking to T.J. Simers inside the Dodgers locker room. {linked here} 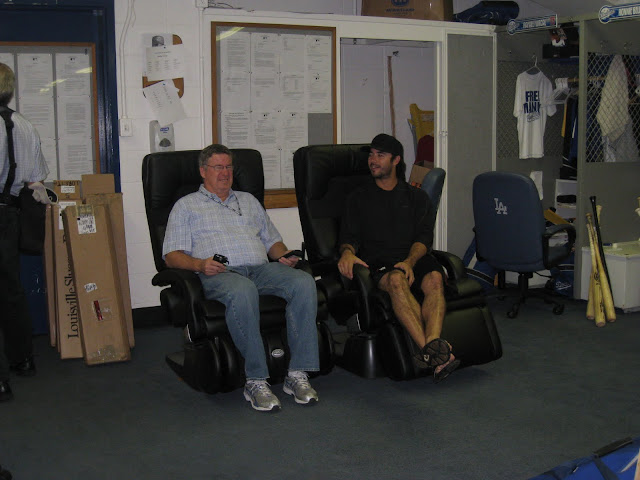 I talked about this earlier in the morning. {linked here} But there have been new developments.

Why even talk in the first place if you're going to say something different the next day? It's hard to understand Andre Ethier. And if you are hurt and need surgery, do it now and get ready for 2012. That's if the Dodgers bring you back.

Ethier made some crazy comments yesterday to T.J. Simers of the L.A. Times. {linked here}

It was obvious that the Dodgers organization were not happy with Ethier this morning. They brought him in and had a private meeting to discuss his comments. Don Mattingly, Ned Colletti and Dr. Neal ElAttrache sat with him.

Ethier was quoted in the Los Angeles Times on Sunday, implying that the club was forcing him to play hurt. Ethier earlier has said that the knee injury he suffered toward the end of Spring Training 2010 would need clean-up surgery after this season.His pointed comments in the column ignited a controversy that indicted club decision makers and infuriated teammates. But Ethier backpeddled an hour before game time, agreeing with the club that he never told officials he was too injured to play. Ethier said he chose not to have surgery last offseason because he was also rehabbing a chronically sprained ankle, but he plans to have the procedure this winter. He said he's had three injections in recent weeks of Orthovisc, a joint lubricant frequently used by arthritis patients.Meanwhile, Ethier rejected speculation that he wants to leave the organization."It's still a great organization. But, obviously, a lot of things need to be changed," he said. "For the team, for the fans, for what the place should be. I definitely want to be here. We were going in a great direction before the divorce [of owners Frank and Jamie McCourt]. I can't say an ownership change is warranted. Everyone knows things aren't right, we definitely agree on that. How do you make it better?"Colletti said Ethier has not asked to be traded."No, just the opposite," said Colletti, who said he still hopes he can lock up Ethier, as well as MVP candidate Matt Kemp, long term.

Ethier is basically saying "Oh forget about what I said yesterday. Just kidding!"


"I got kind of blindsided by this," said Mattingly. "That's taking a shot at my integrity, at the organization and training staff and Ned -- and personally that I would put a guy out there that was hurt and risk his career. I'd never do that. That's not in my DNA. I'd rather lose my job than put a guy out there with the chance to hurt himself or his career in a long-term way. We knew 'Dre is banged up. But I always check with him, and he's never said he couldn't play.
"In fact, there was a day game [against Houston], and I told him in the weight room he wasn't playing -- and later he came into my office and said, 'I want to play.'"
Mattingly declined to speculate on whether Ethier's comments in the article were motivated by contractual desires or to serve as an excuse for the outfielder's second-half slump. Instead, Mattingly said if Ethier needs surgery now, "he's better off to get it now."
"He's told me he wanted to keep playing, and it's been his decision to keep playing," said Mattingly. "He never told us he can't go.
"It's pretty easy to pile on the Dodgers now. But this, to me, is off base."
Translation - Mattingly is saying that Ethier lied.

The biggest problem is that Colletti thinks Ethier should be locked up long-term.

Just the opposite, to quote Uncle Ned.

hmmm just points to the dysfunction with our organization from top down. starts with bad ownership, constant turmoil in the front office, a gm that has made very poor decisions coupled with some freak strokes of good luck, to a inexperienced manager that has made a lot of mistakes this season and a staff medically that has had either bad medical research and or failed to keep people healthy. top down we have a lot of problems... and it goes to the top with ownership.

I'm now not sure the place you are getting your information, but good topic. I must spend a while finding out more or understanding more. Thank you for fantastic information I used to be searching for this info for my mission. Judi Bola Online