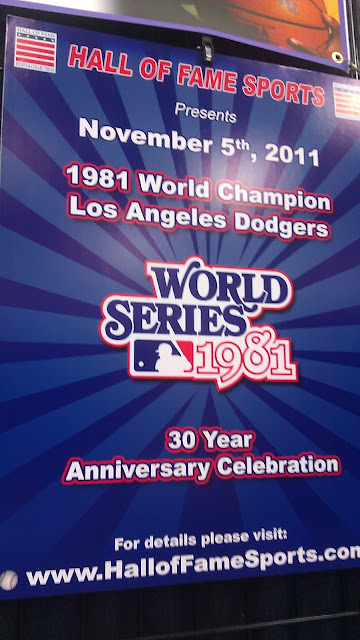 Hall of Fame Sports will be doing a 30 year Anniversary celebration of the Dodgers 1981 World Series Championship this November at Frank & Son in City of Industry. No guests have been announced yet. I'm sure they are trying to get many players from that '81 team.

Not to be selfish here, but I'm hoping it's not the players you can usually get at the stadium. I can just start over and get them all on a single item like a huge picture. We'll see.

Autographs that I have from that team -

Players that I need -

That's it. I just need these 4 pitchers. Unfortunately, Steve Howe passed away.

Send me a e-mail on who you want to see at the show. I can forward your requests to the promoters. I'll just forward the most popular requests. Hopefully the popular requests is not the players that I don't need. :)

Or I can give Hall of Fame Sports the top 10 names that I got and maybe they can take a look at those players and see if they can get them for this great show.

By the way, go to Baseball Reference for the '81 Roster. {linked here}

Oh and before you tell me "You can get those guys through the mail bla bla bla....". I do not do "TTM". I have already explained. Nothing against those that do it but I don't see the fun in it. I rather get the autographs in person.

Thanks.
Posted by Roberto Baly at 9:00 AM

Yeah I need most of the guys u mention to complete my ball with the exception of jay johnson,mike sciscia, and tom lasorda

Dusty Baker and Davey Lopes are the two big ones for me.


Dusty has become a guy who I know as the "other teams" manager now. I want him back in LA signing something for me.

I just need Davey Lopes for my infield project.

When I talked to Chris from HOF Sports last Wednesday, he said they had 20 players confirmed so far. They've already announced Lasorda. He also said they'd announce more in the coming weeks.

Should be interesting who they get and how high the prices are set.

@ dodgerbobble - Davey Lopes will be doing a signing soon. Don't worry. It might be a reunion with Garvey, Cey and Russell again.

@ TruetotheBlue - 20? Last time I spoke with him it was 15. Looks like he is working hard on this project. Looking forward to it! Who do you need?

Yeah, he told me 20 on Wednesday. Also said he'll have a few more to add to the Newcombe signing.
I've got "the infield" on a 16x20 and have Fernando, Sax, Scioscia, Garvey, Russell & Cey on individual balls. I'm tempted to start a team project on 1 item.

Same here dude. Got that 16x20 pix. I do have the '81 World Series Program. Already have some guys in it. Maybe I'll finish it. Who knows. We will see who they announce.

Roberto - Really? That's very exciting. Davey Lopes has been my "white whale". Can't wait to find out when the appearance will happen.

really hoping they somehow convince terry forster to sign. would also love to see bob welch and scioscia. i have had good luck with mail-in to hof sports this summer and am looking forward to the next round of 'dodger days'.

@ dodgerbobble - Yes. He did a signing with the other guys a couple of times the last several years. I'm surprised you have missed him.

@ gcrl - I hear Scioscia is hard just because he's a current manager and is making good money. No need for him to show up at these paid signings. He does free signings because he is sponsoring something. We shall see.

@Roberto. Thanks for the heads up. I need a few from the team and will be there. BTW- Burt Hooton and
Tom Niedenfuer are great through the mail signers. Might be worth a try.