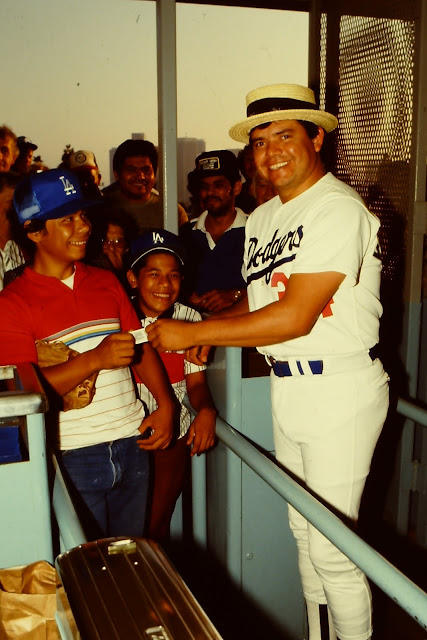 Since 1945, Valenzuela is the only player in the Major Leagues to win his first eight career starts

At home, once fans knew Valenzuela’s next start date, the former Stadium Way box office would sell out that game within 24 hours. In 1981, on a game where Valenzuela was not pitching average attendance was 35,000-40,000, while his starts saw an attendance of more than 50,000

On the road, Valenzuela’s starts would also sell out. In anticipation of a May 1981 roadtrip to New York, the Mets built two extra ticket booths near the subway entrances to accommodate the anticipated rush of fans. The crowd of 39,848 was the Mets' largest of the season, they had been averaging 11,358

Also on the road, the Dodgers’ PR department had to set new media guidelines due to the overwhelming media attention Valenzuela garnered. One press conference was scheduled on Valenzuela's first day in each city on the road and another after he pitched

Valenzuela’s starts also affected television ratings. His May 3, 1981 start at Montreal drew a 19.6 Nielsen rating and 59 share in Los Angeles, an estimated 1.2 million adults watching at home. By comparison, the Game 7 Boston-Philadelphia NBA Eastern Conference final that night drew a 3.6 rating and 10 share

Early in the 1981 season, reporters called 76-year-old Hall of Fame pitcher Carl Hubbell, the former New York Giants lefty known for his screwball pitch. “The first time I saw Fernando, I knew he was a natural,” Hubbell said. “His delivery is just about perfect.”

In early May 1981, Valenzuela was invited to appear on the national television program “Good Morning America” even though he did not speak English

Hall of Fame Manager Tommy Lasorda announced his wife Jo asked for Valenzuela’s autograph, the first time she had ever requested a player’s signature. Lillian Carter, the mother of former President Jimmy Carter, also requested a signed baseball
Posted by Roberto Baly at 10:00 AM