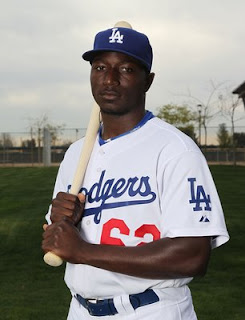 I don't understand this trade. I think it's a terrible deal. But what do I know?

The Boston Red Sox have traded for Seattle Mariners starter Erik Bedard, a major league source tells ESPNBoston.com's Gordon Edes.The three-team deal also involving the Los Angeles Dodgers was agreed upon just moments before the 4 p.m. ET deadline, according to the source.In the trade, Bedard and fellow Mariners pitcher Josh Fields are headed to Boston; Dodgers outfield prospect Trayvon Robinson is going to Seattle; Red Sox prospects Tim Federowicz, Juan Rodriguez and Stephen Fife are headed to the Dodgers; and Boston prospect Chih Hsien Chiang is headed for Seattle.Bedard is 4-7 with a 3.45 ERA this season. He has a 55-48 career record with a 3.69 ERA.

Prospects? Maybe, but not top prospects.

The Dodgers have confirmed this trade.

Reminds me when the Dodgers visited Crenshaw High School last April for Jackie Robinson day and they brought Trayvon Robinson from New Mexico for the special occasion. {linked here and here}

I don't think the Dodgers were really sold on Robinson. I think they like Sands a lot more, and with Kemp and Ethier, only one spot is open in the OF.

This was about getting another option at C in the next year or so.

This guy they traded for is no better than AJ Ellis. This is an awful trade. I hate Colletti.

I am not that impressed with Sands so far. I wish Robinson would have been given a shot in LA first. Can LA package Colleti to Japan?

Love your blog, been a fan for a few years. Keep up the good work.

There are no open spots in Tha Outfield! If your talkin' bout left field... Tony Gwynn got it on Lock!!....

I cannot comprehend this trade. Like Magic Johnson, we a gotta stay positive.

What is it with Ned Coletti and Boston ??? Another terrible trade that only bolsters Boston... yech...