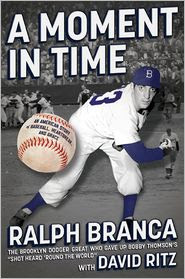 I'm a big fan of anything that's related from the 50's Dodgers. I will be getting this book.

Ralph Branca has written a memoir that will be on sale this September from Simon & Shuster. I'm hoping for a book tour in southern California!

The Brooklyn Dodgers pitcher who gave up Bobby Thomson’s “Shot Heard ’Round the World” delivers an inspiring memoir that captures the golden era of baseball.

Ralph Branca is best known for throwing the pitch that resulted in Bobby Thomson’s “Shot Heard ’Round the World,” the historic homerun that capped an incredible comeback and won the pennant for the Giants in 1951. Branca was on the losing end of what many consider to be baseball’s most thrilling moment, but that notoriety belies a profoundly successful life and career.

A Moment in Time details the remarkable story of a man who could have been destroyed by a supreme professional embarrassment—but wasn’t. Branca came up as a young phenom, playing for the Brooklyn Dodgers during their heyday. He was a staple of the Dodgers’ teams in the late 1940s, dominating the National League. It’s no stretch to say that New York baseball was the center of the sporting universe and that the players were part of the fabric of the neighborhoods, of the city itself. A Moment in Time offers a rare first-person perspective on the golden era of baseball, opening an amazing window on a world populated by legendary characters like Jackie Robinson, Pee Wee Reese, Gil Hodges, Leo Durocher, Branch Rickey, and Walter O’Malley. This is an entertaining, deeply inspiring, classic baseball tale.
Posted by Roberto Baly at 9:00 AM