What's going on at Dodger Stadium for the next three games against the Detroit Tigers?

Matt Kemp will host a group of inner-city children at Monday’s game as part of his community initiative Kemp’s Kids. The group will meet with Kemp on the field during batting practice.

Dodger ticket office employee Max Stone, who turned 90 on April 12, will throw out a ceremonial first pitch at Monday’s game. Max has worked at Dodger Stadium for more than 20 years and before that worked with Dodger Stadium’s game staff as a labor-union business agent.

James Loney will welcome a group of patients and care managers to the game as part of his Loney’s Lounge program. This group will arrive early to watch batting practice from the field, meet with Loney and then enjoy the game.

Members of the music group LMFAO, who are Los Angeles natives, will throw out a first pitch. LMFAO’s new album will be released on Tuesday as well.

Olympic swimmers Rebecca Soni, Ricky Berens, Jessica Hardy and Eric Shanteau will be recognized on the field before the game. Soni is an Olympic gold medalist and USC alumnus and is in her second year as a USC Assistant Coach. Berens won an Olympic gold medal as part of the world record-setting 4 x 200 meter freestyle relay and his teammate Shanteau is a cancer survivor that hopes to compete in his first Olympics in 2012. Hardy has won a total of seventeen medals in major international competition and is currently a world record-holder in two breaststroke events. 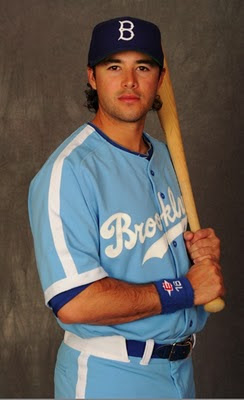 Chad Billingsley will host a group of 10 children from Mattel’s Children’s Hospital at UCLA at Wednesday’s game as part of his Chad’s Champs program. Each child will receive a program t-shirt and will meet Billingsley on the field during batting practice. All participants will also receive a meal voucher courtesy of Coca-Cola.


The Dodgers and Tigers will both wear throwback uniforms at Wednesday’s game. Each of the Dodgers’ remaining throwback midweek day games will feature half-price food and soft drinks. For details or to purchase tickets, visit www.dodgers.com/throwback.
Posted by Roberto Baly at 10:30 AM