Selig to McCourt "No T.V Deal for You!" 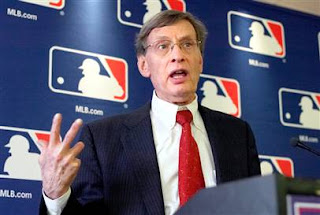 I'm not surprised by today's news that Bud Selig has rejected the Fox/McCourt T.V. deal. From the L.A. Times. {linked here}

Major League Baseball Commissioner Bud Selig on Monday rejected a proposed television contract between the Dodgers and Fox Sports, invalidating a divorce settlement between Frank and Jamie McCourt and all but challenging Frank McCourt to surrender the team or sue.

Selig rejected the contract on the first business day after the McCourts announced a settlement contingent upon approval of that contract.
Selig did not strip Frank McCourt of ownership of the Dodgers. However, McCourt has said for months that approval of the Fox contract was critical for the Dodgers' financial health.
It was not immediately clear whether Selig would publicly explain his decision. He had said earlier that he would withhold a decision pending an investigation into the Dodgers' finances and operations.
But Selig was said to be aghast over a provision in the divorce settlement that would divert almost half the immediate payment from that television contract for the benefit of the McCourts rather than for the benefit of the Dodgers.
Exactly! Why sign off on this deal when half of the payment was going to the McCourts. I'm glad Bud rejected the deal. I'm expecting lawsuits now.

Oh and don't forget about June 30. Let's see if he can make payroll. If he can't, Selig will seize the team.

"Pursuant to my authority as Commissioner, I have informed Los Angeles Dodgers owner Frank McCourt today in a detailed letter that I cannot approve the club's proposed transaction with FOX. This decision was reached after a full and careful consideration of the terms of the proposed transaction and the club's current circumstances. It is my conclusion that this proposed transaction with FOX would not be in the best interests of the Los Angeles Dodgers franchise, the game of Baseball and the millions of loyal fans of this historic club.
"Mr. McCourt has been provided with an expansive analysis of my reasons for rejecting this proposed transaction. Critically, the transaction is structured to facilitate the further diversion of Dodgers assets for the personal needs of Mr. McCourt. Given the magnitude of the transaction, such a diversion of assets would have the effect of mortgaging the future of the franchise to the long-term detriment of the club and its fans.
"As I have said before, we owe it to the legion of loyal Dodger fans to ensure that this club is being operated properly now and will be guided appropriately in the future. This transaction would not accomplish these goals."
Posted by Roberto Baly at 2:30 PM

even if MLB seize the team they will still have to pay McCourt rent for the stadium, he will get the $ from the tickets and parking...

True ^ but I would rather have him as a land lord than a owner. We can always move out. Lol I want an owner that can run a team not only financially but with a sense of winning. Where if we need to spend we can but also develop for the future. Now a championship would be nice 10 would be better....