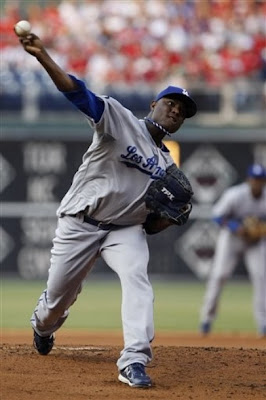 Congratulations to Rubby De La Rosa, who gets his first win as a starter. He was off to a shaky start but overcame it with a solid five innings, four K's, one earned run and five walks.

Dee Gordon was impressive in his first start with three hits and one stolen base. Matt Kemp keeps on smashing the ball as he hit his 17th homer of the season.

And don't forget about the bullpen who were able to finish off the Phillies.

On a low note, Jerry Sands went 0-4 and left three men on base.

I never imagined on January 9 that Gordon, De La Rosa and Sands were going to start a game together in 2011. Never! {linked here}

Hello! My name is Stan from VIP Tickets in Los Angeles. I just wanted to drop a line as I've been following this blog and thought I'd chime in. It seems that even though the Dodgers have been playing better baseball as of late, fans still don't want to go to games because of McCourt. It's a little perplexing because ultimately, it's the players who are suffering at home games with such sparse support.