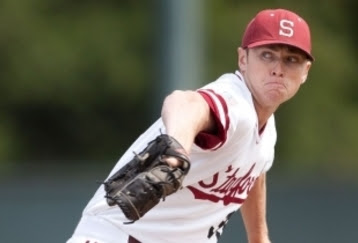 Thanks to the Dodgers for sending the following info on Chris Reed. Plus quotes from Assistant General Manager, Scouting Logan White.

Reed, a 6-foot-4, 190-pound junior, earned an honorable mention All-Pac-10 selection and has gone 6-2 with a 2.54 ERA in 28 games (one start) this season for the Cardinal, who advanced to the NCAA Super Regional after winning the Fullerton Regional this past weekend. In 2011, the 21-year-old has limited opposing hitters to a .201 batting average with 48 strikeouts and allowed just one home run in 49.2 innings. As a reliever, Reed has posted a 1.80 ERA and ranks third in the Pac-10 with nine saves in 11 attempts this season. In three seasons at Stanford, Reed is 8-2 with a 3.96 ERA in 53 games.

“He’s an excellent competitor, has three quality pitches, sound mechanics and a great deal of athleticism,” said White. “He’s also a smart, local guy who has a fine family background.”

The Cleveland High School (Reseda) graduate was rated as the top prospect and earned an All-Star selection in the Atlantic Collegiate Summer League in 2010, posting a 1.09 ERA with 39 strikeouts in 33.0 innings.

The Dodgers have selected a pitcher with their first pick in each of the last nine seasons: