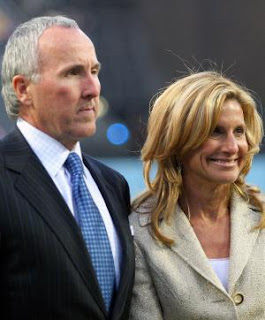 Nothing to get excited though. It just depends on what MLB does. From the L.A. Times - {linked here}


Frank and Jamie McCourt announced a divorce settlement Friday, one that requires Frank McCourt to win two crucial decisions to assure his continued ownership of the Dodgers.
The settlement is contingent upon Major League Baseball's approval of a long-term television contract that has been reached between the Dodgers and Fox. If Commissioner Bud Selig were to reject the agreement, the settlement would be voided and the parties would resume proceedings in divorce court.
Under the settlement, Jamie McCourt agreed not to challenge the Fox contract.
In addition, the McCourts agreed to a one-day trial so that Los Angeles Superior Court Judge Scott Gordon could make a final determination of whether the Dodgers belong solely to Frank McCourt or whether the team should be considered community property.
If Gordon rules that the Dodgers are community property, the McCourts would split their assets 50-50, which would almost certainly result in the sale of the team, barring Frank McCourt raising hundreds of millions of dollars to buy Jamie out.
If Gordon rules that the Dodgers are the separate property of Frank McCourt, then Jamie McCourt would get $100 million, keep the couple's homes and receive indemnity from tax liability.
My prediction - Frank McCourt misses next payroll and Bud Selig/MLB puts the Dodgers up for sale. That's if McCourt can't do anything about it in courts.
Posted by Roberto Baly at 11:00 AM