What a shame! Ethier & Kemp needs your All-Star votes! 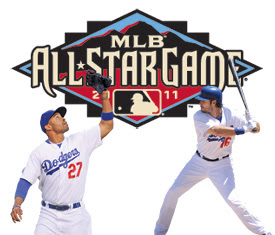 Got this e-mail from Dodgers.com

May 31, 2011 – Major League Baseball has released the first set of National League balloting results for the 2011 All-Star Game to be played on Tuesday, July 12, at Chase Field in Arizona. The Dodgers' young standout outfielders are just outside of the top three in the NL, with Andre Ethier in fourth place and Matt Kemp in fifth. Ethier trails St. Louis' Lance Berkman by fewer than 100,000 votes, while Kemp is a little more than 200,000 back of his teammate. Cast up to 25 ballots per e-mail address on the 2011 All-Star Game MLB.com Ballot Sponsored by Sprint.

You need to vote!

Lance Berkman 3rd? He leads the NL in OPS.