What's going on at Dodger Stadium for the next three games against the Colorado Rockies?

Today is Memorial Day and the Dodgers will honor the military during pregame ceremonies. Army Sergeant First Class Gigi Theocharides will perform the National Anthem and God Bless America and Army Captain David Freedman will be honored as the Veteran of the Game. A Joint Services Color Guard will present the colors and Navy Petty Officer First Class Robert J. Kaiser will throw out the ceremonial first pitch and announce “It’s Time for Dodger Baseball” at the start of the game. Officer Kaiser is stationed aboard the USS New Orleans (LPD 18) and was selected as the 2010 Sailor of the Year for the Expeditionary Strike Group.

Monday and Tuesday mark the final days of May, when military are able to attend Dodger games for free by showing their military IDs at any Dodger Stadium ticket booth day of game. Each military ID will be good for two complimentary tickets, based on availability, and more details are listed at www.dodgers.com/military. In addition, military members with a valid military ID will be able to purchase all merchandise at Dodger Stadium on Memorial Day at a discount of 20% off. Approximately 5,200 members of the military will be at the Memorial Day game.


Monday is also $1 Dodger Dog Day presented by Farmer John. All Dodger Dogs will be $1 at Dodger Stadium as the Dodgers and Farmer John celebrate the 53rd year of their partnership. To purchase tickets, visit www.dodgers.com/promotions.

Chad Billingsley will host a group of 10 children from Mattel Children’s Hospital UCLA at the game as part of his community initiative, Chad’s Champs. The group will meet with Billingsley on the field during batting practice and get his autograph and receive program t-shirts and tickets to the game as well as a meal voucher courtesy of Coca-Cola. 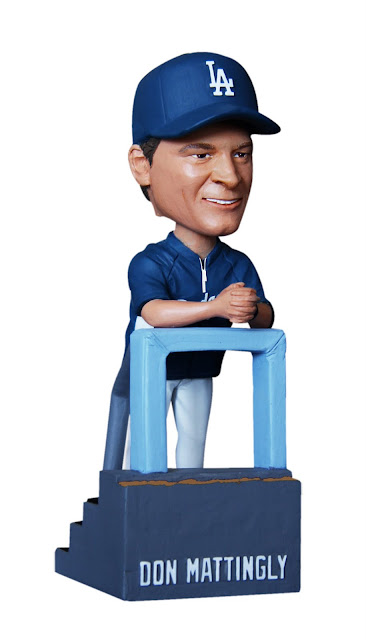 Fans at the game will receive Don Mattingly bobbleheads, presented by Carl’s Jr. To purchase tickets to the game, visit www.dodgers.com/promotions.

Longtime Dodger season ticket holder David Hirsch of Simi Valley will throw out a ceremonial first pitch. Hirsch has been coming to Dodger games since the team moved to Los Angeles and is in his 45th season as a season ticket holder, having been passed the seats by his father. He celebrated his 60th birthday in May and now shares the seats with his son.
Posted by Roberto Baly at 3:30 PM