The June edition of Dodgers Magazine, featuring right fielder Andre Ethier on the cover, debuts in-stadium on Tuesday. Inside are features on Ethier’s 30-game hitting streak, including photos from each game, a story about what Dodger players do with mementos from their career milestones, a feature on how the influence of Dodger legend Maury Wills and first base coach Davey Lopes has helped the Dodgers’ running game and a behind-the-scenes look at catcher Rod Barajas’ life as a father of six. Fans can purchase copies of Dodgers Magazine at any merchandise stand at Dodger Stadium or order a subscription for home delivery at www.dodgers.com/magazine or by calling 877-258-3062. 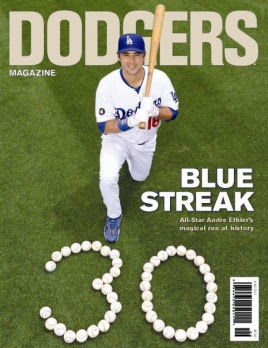