My brother-in-law is funny. He says "Don't post this video! What if Matt Kemp gets traded because the owner of the Dodgers saw your video". 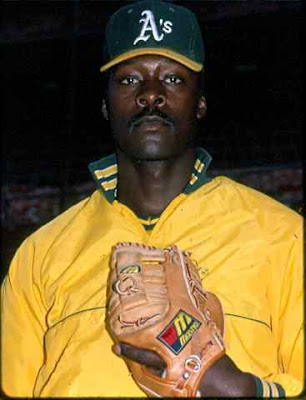 Don't mess with Dave Stewart. As you already know, the former All-Star pitcher is now a agent. He represents a couple of Dodgers. He represents Chad Billingsley and Matt Kemp. Remember that Billingsley signed a long term contract with the Dodgers earlier this year.

As I mentioned in my earlier post this morning, Stewart was at Dodger Stadium chatting with Kemp and other officials from the Dodgers. {linked here} I apologize for posting this video late. I wasn't online earlier this afternoon.

While Stewart was signing autographs, I decided to ask Stewart when is Kemp going to sign that big contract.

Shocking response. Or maybe it's not shocking but it is still surprising.

Check out the video -

Me: Hey Dave, when is Matt Kemp signing that big contract?

Stewart: Soon as you get real owners.

Me: And when will that happen?

Stewart: That I cannot tell you.

Have a nice career in New York or Boston Matt!
Posted by Roberto Baly at 8:00 PM