Andre Ethier is in the New York spotlight

A really cool chart from Inside Edge Stats was provided to the L.A. Times. {linked here} 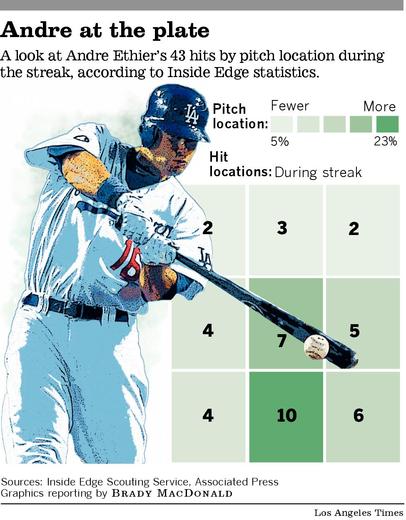 Ethier is hitting them all over during this streak with a .387 batting average. Ethier doesn't stop working. Hitting coach Jeff Pentland says he's always in the cage. From the L.A. Times - {linked here}


"He probably spends more time in the cage than anybody I have," said Jeff Pentland, the Dodgers' hitting coach.
"He spends up to 20 minutes" in the batting cage even before taking batting practice on the field, while "most guys are in there 10 minutes or less," Pentland said. "Then after BP he'll go back in there again, and then he'll do it right before the game. He does it every day."
No word yet if he can start tomorrow against the New York Mets.

Mark Simon of ESPN Stats and Information has a guest post on Dodger Thoughts. {linked here}

Simon takes a closer look on what's ahead this weekend against the Mets. Ethier is currently on a 29 game hitting streak and the Dodgers record is 31 by Willie Davis. Ethier has a chance to break it.

The New York Times wonders if there should be a asterisk next to his pursuit. {linked here}

How about this really interesting note....

If not for Giants pitcher Jonathan Sanchez, Ethier would be at 31 games. From CBS Sports {linked here}

Sanchez was the Giants' starting pitcher on April 1, the only time this year that Ethier was held without a hit. He had a hit the day before, and he's hit in all 29 games he's played since.Sanchez is why 29 isn't already 31, which would tie Davis's Dodgers franchise record."He just doesn't see me that well," Sanchez said. "Lefty on lefty. I get him out. I'm not sure why."Ethier has just four hits -- and 11 strikeouts -- in 30 career at-bats against the Giants' left-hander. He's 0-for-6 with three strikeouts against Sanchez this year, going 0-for-3 on April 1 and also on April 13 in San Francisco.

Ethier seems to really enjoy this streak and is not stressing over it. From AFP {linked here}


"Like I keep saying, I'm not focusing on the streak," Ethier said. "I mean, I don't go home at night or wake up in the middle of the night and worry about this thing.
"I enjoy it and I want to go as long as I can, but it's not a constant thought."
And lastly, Ethier made a visit to MLB's fan cave in New York this morning. {MLB.com}
Posted by Roberto Baly at 9:30 PM