How do you feel about this?

I don't mind. I actually like it. It's time for explosive openings. Tim Lincecum and Clayton Kershaw. On sale only during Opening Day! 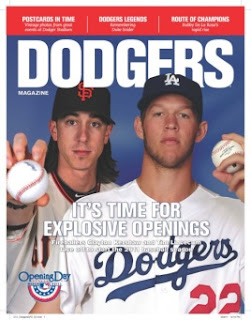 For the first time ever, Dodgers Magazine is offering a cover unique to Opening Day, featuring starting pitchers Clayton Kershaw and Tim Lincecum. Fans can only purchase this version of the magazine at Dodger Stadium merchandise stands on Opening Day. The cover story features Kershaw, who with his wife Ellen volunteered to help build a school in Zambia during the offseason, and other stories including Roger Kahn’s first-person reflection on Duke Snider and a photo essay on the late Hall of Famer. Dodger first base coach Davey Lopes also talks about Dodger Hall of Famer Jackie Robinson. Fans can subscribe to Dodgers Magazine at www.dodgers.com/magazine or by calling 877-258-3062. 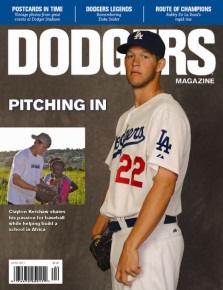 The April edition of Dodgers Magazine will be available on Friday at all merchandise stands. It features Kershaw on the cover and the inside content is the same that appears in the Opening Day edition.