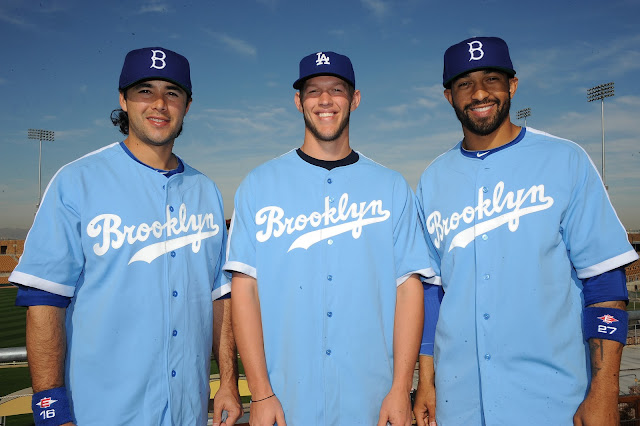 Just in. From the Dodgers.


DODGERS TO WEAR 1940s ERA
BLUE UNIFORMS FOR SIX HALF-PRICE
FOOD AND DRINK DAYS IN 2011
Nearly 50,000 votes are cast to determine winning uniform for throwback days
LOS ANGELES – The Los Angeles Dodgers announced today that the 1940s “satin” uniform was selected by Dodger fans as the winning “throwback” uniforms for six mid-week day games in 2011. Each of the games will feature half-price food and drink, including alcoholic beverages, for the first time ever at Dodger Stadium, with a special half-price six-game ticket plan available for fans who want to attend each of the games.
Nearly 50,000 votes were cast at dodgers.com/throwback with the winning uniform edging out the 1911 road uniform by less than 2,000 votes.
Though the original uniform worn in the 1940s was made of a highly reflective satin fabric to make it more visible under the lights for night games, the throwback jerseys will maintain a similar feel as those worn by the Dodgers throughout the 2011 season.
The Brooklyn jerseys will be available for purchase by fans at Dodger Stadium beginning on the first date they are worn, April 21 against the Atlanta Braves. That date marks the anniversary of the franchise’s first victory, which also came against the Braves in 1890. The other five dates are May 4 (vs. Cubs), June 15 (vs. Reds), June 22 (vs. Tigers), August 10 (vs. Phillies) and August 31 (vs. Padres).
The special “Throwback Six-Pack Plan” includes half-price tickets for each of the half-price food and drink games. Details are available at dodgers.com/throwback. Individual tickets go on sale tomorrow at 10 a.m. at dodgers.com, by calling 866.DODGERS or by visiting the Dodger Stadium box office.
The last time the Dodgers wore a throwback uniform was June 23, 2007 in Tampa Bay as part of a “Turn Back the Clock Night” honoring former Dodger player and Rays coach Don Zimmer. That night, the Dodgers wore replica 1955 Brooklyn road uniforms. 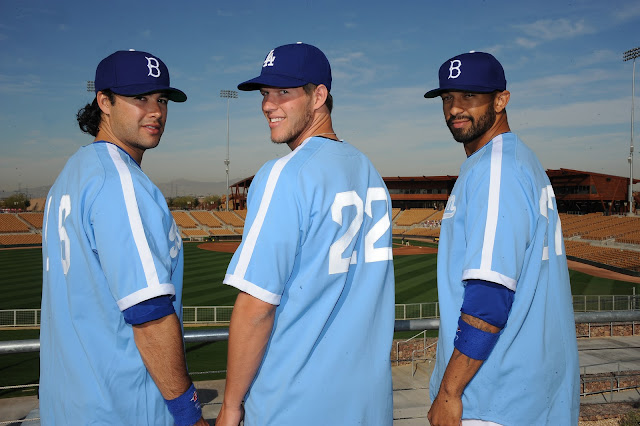