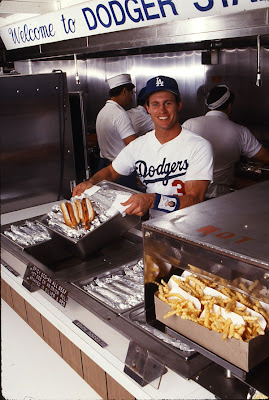 One of the most popular Dodgers in the 80' was on a book tour last Friday and Saturday. {linked here}

Steve Sax wrote a book titled "Shift". It's a book about being positive at all times and how to reach your goals.

I was undecided to chose between Friday or Saturday. Sax was signing at Canter's Deli in Los Angeles on Friday and he was at El Cholo Restaurant on Saturday. I went Friday since it was very close to where my wife works. I shouldn't even say close because 5 miles between 6th st. and Fairfax on a rainy Friday night is almost an hour of driving. I'm serious.

The signing was to start at 6pm. I showed up too soon but I still went inside to see if anything was going on. I didn't see anything. So I left. I went back inside the car and took a nap. At 5:20 I went back inside. I noticed Sax and employees setting up a table with his books.

Luckily, there was a Dodger fan who reads this blog waiting to meet Sax. Eric, thanks for the time. I'll post your pictures tomorrow.

Both of us were a bit nervous to ask Sax to sign extra items. We weren't so sure how he was going to respond. I brought my Dodger seat and Eric brought some other items.

It was 5:40pm and Sax was just sitting and talking to another gentlemen. I decided to go and ask if I can buy the book and get it signed now. He asks for my name and asks where I heard about his appearance. I told him it was on ESPN 710am. He shakes my hand and thanks me for coming. I ask for a picture. I didn't ask him to sign my Dodger seat since I left it with Eric. I go back to get the Dodger seat and I tell Eric, "I'm ready for him to yell at me".

I approach Sax, "Hey Steve, only one man is missing on this great seat and it's you!".

Of course I have a sharpie. :) Make sure to visit the official site of Steve Sax. {linked here}

About the Dodger seat....

I'm ready to get it retired. I need a couple of other guys but it's pretty much done. My goal was to get Dodgers that played before 2000. Just players that I felt made an impact to the organization. I still have another seat that I haven't used since they sold it by pairs. And I also have another pair that hasn't been touched. Not sure what to do with those. I thought about getting current guys on another seat but it just doesn't feel right for me.

A slideshow of Dodgers that have signed this seat. You won't see Tommy Lasorda or Manny Mota here. They did sign the seat but I wasn't able to get a picture with them. Lasorda was too busy eating {linked here} and Mota literally kicked my butt for asking him to sign this. I can't elaborate on what happened. He did sign it but let's just say it wasn't pretty.

Thanks to Sax and Canter's Deli for the event.
Posted by Roberto Baly at 11:00 AM