Prince Fielder is not coming to Los Angeles. 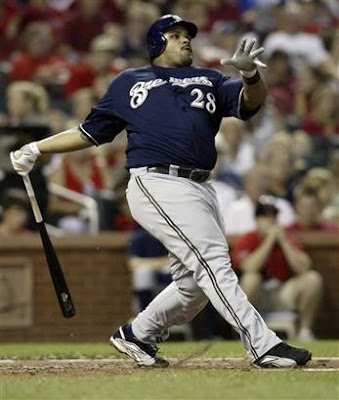 Just a recap of news involving the Dodgers...

It's not official until he passes a physical. Vicente Padilla will sign a one year deal with the Dodgers for $2 million. {ESPN L.A.}

I like this deal just because it's good to have a extra starter. He's only getting $2 million so you don't have to worry if he stays healthy. I think he will fill in fine in the bullpen and be a spot starter. Don't be surprised if Padilla beats out Jon Garland for the 5th spot out of spring training.

This one is not official just yet either. The Dodgers sign Tony Gwynn Jr. Ned Colletti won't confirm yet. {Dodgers.com}

Expect these signings to be announced really soon. Most likely tomorrow on Gwynn and Thursday for Padilla.

Why are fans getting all excited over Prince Fielder? You seriously think this trade is going to happen? No way. That rumor has already been shut down. Just think about this, why would the Brewers trade Fielder for James Loney and Jonathan Broxton!? Why? I would think it's going to take a lot more to get Fielder. It's not happening.

It's fun to read all these rumors but you have to be realistic.

How about this rumor.... The Dodgers reach out to the Royals! For Zack Greinke! Yes!

The Los Angeles Dodgers have made at least one contact with the Kansas City Royals at this week's winter meetings, Dodgers general manager Ned Colletti said Tuesday. Although Colletti wouldn't identify what players were discussed, the call clearly was about the same player almost every call to the Royals is about these days, former American League Cy Young Award winner Zack Greinke.